Sports   Cricket  10 May 2019  A glance into the past when ABD hit the second-fastest 150 of all-time WC history
Sports, Cricket

AB De Villiers hit an unbeaten 162 from 66 balls, as he struck 17 boundaries and eight sixes, to demolish the West Indies' attack. 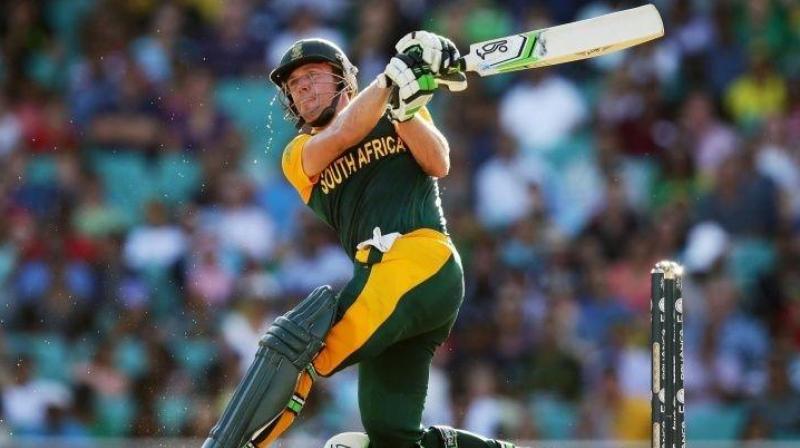 Mumbai: It was the 11th edition of the World Cup final as the Proteas took on the Carribean cricket team and the date was 27th of February 2015; the venue was Sydney, Australia, and the opponent was West Indies.

Despite whoever the opponent was, a sole man, known as Abrahim Benjamin De Villiers came in at number 5, and put on a dominant late display to put South Africa in a commanding position, as he and Rilee Rossouw posted a massive score of 408 for five.  De Villiers and Rossouw, bolstered the run rate and were proficient during the batting power play, scoring 72 in five overs as both scored their 50s.

AB De Villiers hit an unbeaten 162 from 66 balls, as he struck 17 boundaries and eight sixes, to demolish the West Indies' attack.

That day AB was unstoppable as he struck his third continuous World Cup hundred against his special rival, coming right after his knock of 146 in 2007 and 107 not out in 2011. AB’s knock of 162 not out came just 40 days after he struck a 31-ball 149 against the West Indies in Johannesburg.

The Proteas captain scored his third World Cup century from 52 balls, he still went on to humiliate the Carribean bowlers, and help his side add another 80 runs from the remaining 3.2 overs of the innings.

At the start of his innings, AB scalped 34 off one over from Holder as he scooped on numerous towering sixes to push the total past 400. The South African batsmen were merciless during the late overs. West Indies captain, Jason Holder was brutally destroyed when AB took away 95 runs in his last five overs after Beginning with a decent 1-9 from his initial five overs.

The Proteas bowlers were also ruthless, as they bundled the West Indies batsman out for 151 to register the biggest winning margin in the World Cup history.