Yuvi came out to bat when Robin Uthappa's wicket fell; India went on to win the match against England by 18 runs. 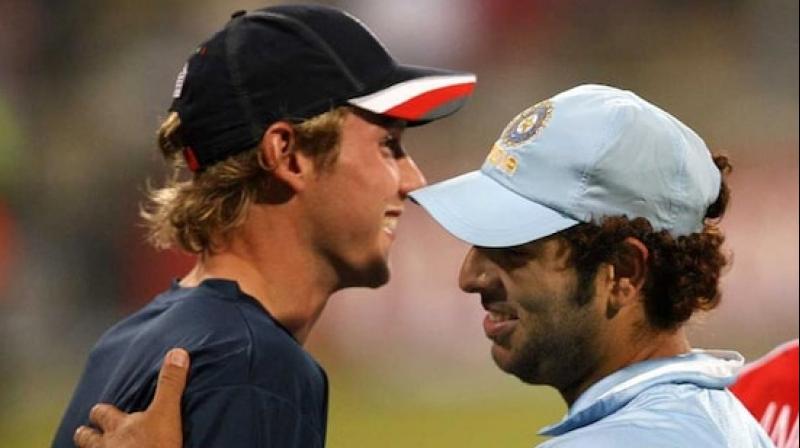 Yuvraj scored his fifty of just 12 balls, which is still the fastest fifty by a batsman in the T20 format. (Photo: AFP)

New Delhi: Indian cricketer Yuvraj Singh decided to retire from all forms of cricket on Monday, and after he formally announced his decision, England's bowler Stuart Broad bid adieu to his biggest nemesis.
Broad posted a picture along with Yuvi on Instagram and wrote: "Enjoy retirement Legend @yuvisofficial".

In what is seen as a great memory by all cricket fanatics over the world, Yuvraj hit six 6's in an over of Broad in the inaugural ICC Twenty20 World Cup in 2007.
Broad was dispatched for six 6's in the 19th over of India's innings. Yuvraj scored his fifty of just 12 balls, which is still the fastest fifty by a batsman in the T20 format.

In this match between India and England, the Men in Blue had won the toss and opted to bat first. Yuvi came out to bat when Robin Uthappa's wicket fell and he provided the late flourish allowing India to post 218 runs on the board.
India went on to win the match against England by 18 runs.

The Men in Blue were able to win the inaugural ICC T20 World Cup in 2007 and Yuvraj was a vital player for the team in the tournament.

The Chandigarh-born Yuvraj captured the imagination of world cricket with his gravity-defying fielding abilities and effortless power-hitting.

"Only if I could articulate what cricket has done for me, to me! But let me tell you this, cricket has given me everything I have. It is the reason why I sit here today," said Yuvraj, whose on-field exploits defined India's last two World Cup triumphs.

A career that spanned over 304 ODIs, 58 T20Is and 40 Tests, Yuvraj imprinted his place in the echelons of cricket as a player who could pretty much win matches for his side either through his electric fielding, deceiving bowling or fierce batting.

Big events brought out the best in him - be it his international cricket entry at 2000 ICC Champions Trophy, the mind-numbing batting exhibition at the inaugural 2007 World Twenty20 or the all-round performance at 2011 World Cup.

He was awarded the Player of the Tournament in India's 2011 50-over World Cup triumph.

"Thank you, this has been a lovely journey. See you on the other side," said Singh, adding that he would continue devoting his time to assisting cancer patients through his 'YouWeCan' Foundation.