With India ending as the losing side in their semi-final versus New Zealand, MS Dhoni might haved played his last match. 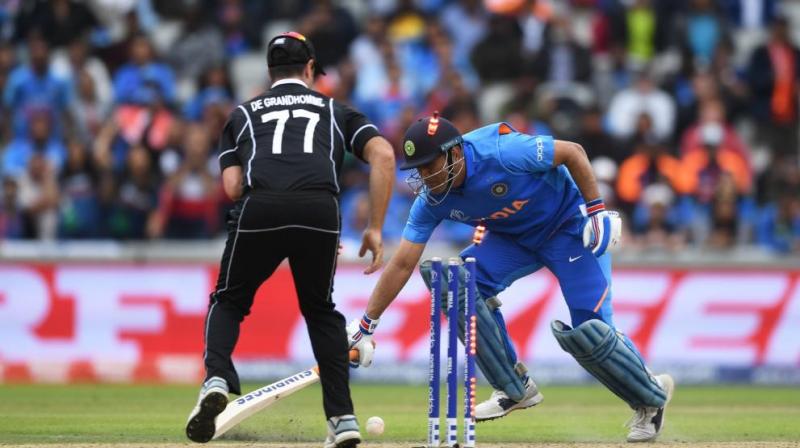 After losing six wickets in quick successions, Mahendra Singh Dhoni was looking to forge a partnership with left-arm off-spinner Ravindra Jadeja to help India get over the line as India look to chase down a stiff target of 240. (Photo: cricketworldcup/twitter)

Mumbai: Could this be the last time we could get to see Mahendra Singh Dhoni, who during the 2011 World Cup final, played out of his skin to play a career defining innings of 91 to help India lift the World Cup after 28 years. With India ending as the losing side in their semi-final versus New Zealand, MS Dhoni might haved played his last match at the World Cup. MS Dhoni known for his coolness and calmness, had walked out in to the middle to help India get out of the mud.

After losing six wickets in quick successions, Dhoni was looking to forge a partnership with left-arm off-spinner Ravindra Jadeja to help India get over the line as India look to chase down a stiff target of 240. Dhoni, who was aiming to take India over the line, holds a brilliant average of 99.85, especially during run chases.

Dhoni who is only second to Kohli (99.04), has overtaken chase master Virat Kohli during the 2019 down-under series versus Australia to register his highest average in successful chases in ODIs (minimum 25 innings). Apart from his highest average, the former captain also holds few other records which tell about his temperament during stiff run-chases.

During the three match ODI series against Australia, Dhoni played a slow knock of 51 runs from 96 balls in India’s 34-runs loss against the Kangaroos. However, MSD regained his prime form by hammering a 55 from 54 balls knock to guide India home in Adelaide.

Dhoni, showed his temperament, class and he proved why he is known as Mr Cool as scored an unbeaten 87 from 11 balls in India’s pursuit of 231. Dhoni’s slow yet steady innings proved to be crucial in India’s seven-wicket win in Melbourne.

Dhoni has been involved in 112 wins when India batted second. Dhoni has been played a crucial role in 73 of those victories. During run chases, Dhoni has amassed 2783 runs with an impressive economy rate of 103.07 and an amazing strike rate of 88.34. Moreover, he has two 100s and 19 fifties under his belt, and also remained on those 47 occasions.

During the semis, Dhoni and all-rounder Jadeja played out of their skins to take India towards their third World Cup final. Ravindra Jadeja who was batting at 73, had forged a partnership of 106 runs from 93 balls with MSD who scored a vital 49 to take India closer to 240. However, India lost the game by 18-runs, but could this be the last time that we could get to see Mahi playing cricket. Well! Only time will tell whether MS has played his last match of his international career.

Before Mahi bhai calls it quit, it’s high time that we started looking at his top three knocks.

It was tough situation when a good partnership between Gautam Gambhir and Virat Kohli had been dismissed by the Sri Lankans, then MSD walked out to bat at three after failing to perform during the whole 2011 World Cup campaign. However, Dhoni forged an alliance with Gautam Gambhir to take India home despite India losing four wickets. In the end, India came of tense situation as Dhoni scored an unbeaten 91 runs to help India lift their second World Cup after 28 years.

India were already leading the series 2-0, but in the third match, Sri Lanka posted 298 runs in 50-overs.  Sri Lanka were helped by Kumar Sangakkara and Mahela Jayawardene who took Lanka towards a huge total, especially Sangakkara scoring a century. India were reeling under pressure after Sachin’s departure. Nonetheless, Dhoni came in at number three and blasted the Sri Lankan bowler to power India home, with Dhoni scoring his career best 183. India won the match with 4 balls to be played. His knock of 183 still remains the highest score by a wicketkeeper batsman in the ODI history.

Dhoni’s first ODI century came versus Pakistan at Visakhapatnam in 2005. During 2005, India played a 6-match ODI series versus Pakistan. After Sachin got out cheaply, MSD walked on to the pitch to partner Virender Sehwag. The deadly pair had forged a formidable partnership to take India towards a huge total of 356 in 50-overs. India got off to a great start after Sehwag smashed 74, but his knock got overshadowed by Dhoni’s knock of 148. In the end, Pakistan lost the match by 57 –runs and Dhoni was adjudged as Man of the Match.

Dhoni has amassed 17,216 international runs in his record career in which he has bagged 16 tons and 107 fifties. Under his leadership, India managed to top the Test rankings for the first time, in 2009. Apart from that, Dhoni has helped India claim 27 overseas Test victories. Dhoni has been influential in affecting most dismissal by any Indian wicket-keeper in Test (294).

In ODIs, Dhoni has helped India win their first T-20 World Cup against Pakistan in 2007. Under Dhoni only, India have managed to lift their second World Cup trophy after 28 years in 2011. Dhoni has also been successful in ODIs too.

Dhoni became the fourth Indian after Sachin Tendulkar, Sourav Ganguly & Rahul Dravid to reach 10,000 ODI runs to hit 10,000 runs. Dhoni was also the first player to surpass 10,000 ODI runs with having an average of over 50. He remains the first and only wicket-keeper to have 120 stump dismissals which is the highest by any wicket-keeper in the ODI history.