Rhodes says the vibrant sports culture at school level is the secret behind South Africa’s excellence in fielding. 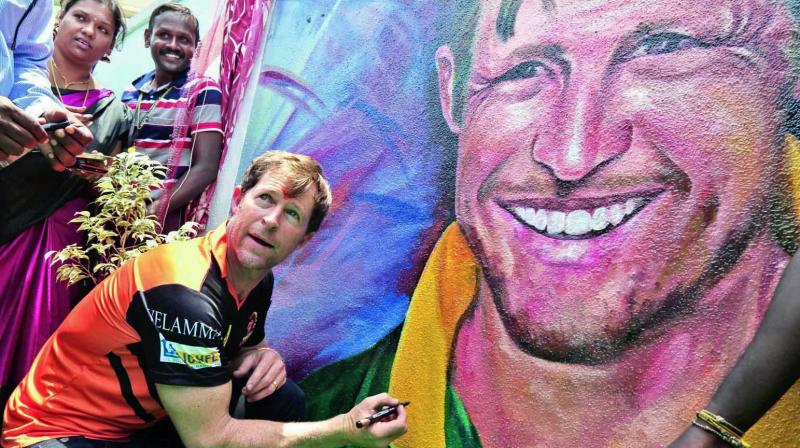 Jonty Rhodes signs an autograph on a painting during his visit to a Chennai school. (Photo: Asian Age)

“The way you dribble the ball with a hockey stick… that’s how I run in the covers. As a tennis player, I would have to return serve with either backhand or forehand and that’s where the split jump comes from. In football, the ‘keeper comes off his line when a forward runs into the box. I was trying to do that as backward-point fielder to cut the angle down for the batsman. My anticipation and reflexes all came from playing different sports,” said the former South African cricketer considered the greatest fielder of the modern era.

Rhodes said Team India’s transformation into an impressive fielding unit was “incredible.” “When we played against India, Mohammed Kaif and Yuvraj Singh were good fielders and Harbhajan Singh was probably the third best. The difficulty that India faced was trying to hide the remaining eight! It was a lot to do with the captains and their approach. M.S. Dhoni and Virat Kohli brought in changes. Fielding has become important in every format of the game,” said Rhodes who rates Paul Collingwood’s one-handed blinder at point to dismiss Matthew Hayden in an ODI at Bristol in 2005 as the best catch he ever saw.

The South African said he felt sad to see De Villiers keep wickets initially despite possessing so much talent as a fielder. “During the 2007 World Cup, I was part of South Africa’s coaching staff. AB had just started playing for the country. I thought he was incredible with lightning-fast feet. He thrashed me when we played tennis in Trinidad,” he added.

De Villiers has taken a sabbatical from Test cricket and his return remains a mystery. Calls for his comeback have grown louder after South Africa’s recent thrashing at the hands of England. Rhodes, however, feels the decision should be left to the player.

“It’s not just about ABD not being there, you can point fingers at various things for the team’s dismal show. I think he wanted to retire a while ago from Test cricket, but Cricket South Africa persuaded him to stay on. Back home, people are very critical. They don’t see the IPL mechanism. They think cricketers are just trying to make as much money as possible and it’s often at the expense of national call-ups,” he said.

The IPL has helped international cricketers unravel the mystery of the conditions in the subcontinent, but the BCCI still remains adamant on not sending players for T20 leagues abroad. “Indian players don’t go to Australia and play BigBash or anywhere else. They have got skill but they don’t spend much time in the conditions outside the subcontinent. It’s a way to improve,” he said.