England vs India 2nd Test, Day 2: Visitors bowled out for 107 at stumps 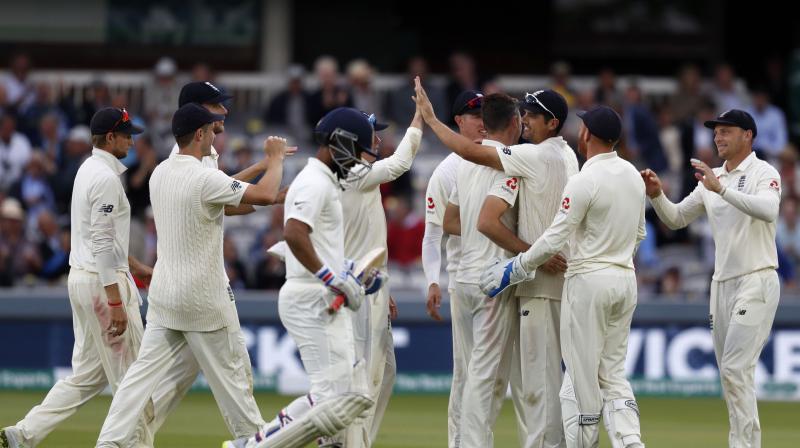 London: India were bowled out for a below-par total of 107 runs on the second day of the second Test against England here at Lord’s.

James Anderson was the star, finishing with a spell of 5-20.

The first session of the match lasted for just 6.3 overs, after which match was halted due to rain. Even though the match resumed, the game was again halted when India’s score read 15-3 from 8.3 overs.

Virat Kohli was the lone hope for the visitors, but he was dismissed for 23 runs by Chris Woakes. After his departure, all eyes were on Ajinkya Rahane, who was dismissed by James Anderson for 18.

WICKET! India seem to have problems aplently as Kuldeep Yadav is the latest to depart. Anderson now has four wickets to his name.

WICKET! Cheteshwar Pujara has failed to make an impact as he is dismissed for just one run.

BOWLED 'EM! James Anderson strikes early to dismiss Murali Vijay for duck. Not the start India would have wanted.

Joe Root won the toss on Friday and decided that hosts England would field.

India have decided to play Kuldeep Yadav alongside Ravichandran Ashwin.

Only four days are left in the yet-to-start second Test between England and India at Lord’s Cricket Ground here, and the players and fans will hope that the rain Gods stay away on day two on Friday.

The first day was completely washed out without even the toss happening as the covers were present on the ground throughout the day.

The big question for India will be if they will play two spinners, after having played R Ashwin as the lone spinner in the opening Test.

Joe Root’s men, meanwhile, will hope to break England’s winless jinx against Asian teams at the home of cricket. India were the last Asian opponents whom England beat at Lord’s in a Test back in 2011.

The live streaming of the match will be available on Sony Liv app.

The live telecast of the match will be available on Sony Six, Sony Ten 3 and Sony Ten 3 HD.