Gayle has previously expressed his desire to play one final Test match, preferably at his home ground Sabina Park in Kingston. 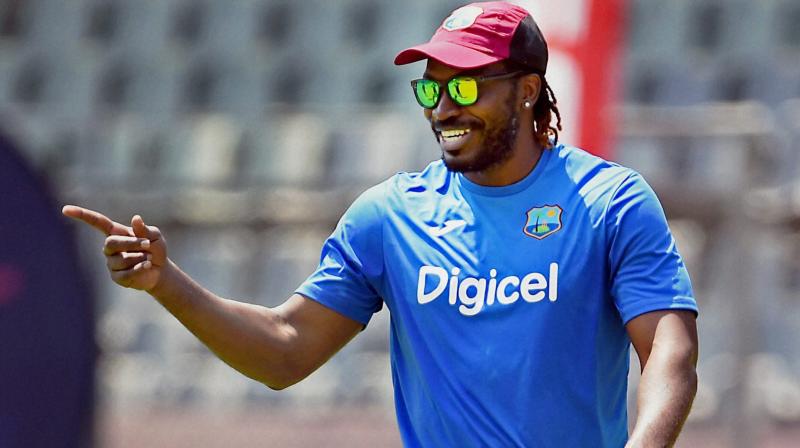 Gayle looked completely out of sorts during the opening ODI against India where he managed only 4 off 31 balls before being bowled by Kuldeep Yadav. (Photo: PTI)

Port of Spain: The flamboyant Chris Gayle is unlikely to get a farewell Test match against India after being overlooked in the 13-strong West Indies squad for the two-Test series starting August 22 at North Sound in Antigua.

The only new face in the side is big-bodied spin bowling all-rounder from Leeward Islands Rahkeem Cornwall.

Gayle, who is just six weeks shy of his 40th birthday, had last played a Test match way back in 2014, against Bangladesh. Gayle looked completely out of sorts during the opening ODI against India where he managed only 4 off 31 balls before being bowled by Kuldeep Yadav.

Prior to the World Cup match against India in Manchester in June, Gayle expressed his desire to play one final Test match, preferably at his home ground Sabina Park in Kingston.

In fact, former pace great Curtly Ambrose in an interview with the PTI had said that if Gayle is selected, it will be a step in a backward direction.

"If Chris Gayle wants to play an ODI series or a T20 series, well, that's not a problem. In terms of Test matches for me is a no-no," Ambrose had said back then.

"Gayle hasn't played Test matches for five years. Bringing him back for one Test, I think, is a backward step. What kind of message are you sending to the younger players? ODIs and T20s are not a problem as he still is a destructive player but Test matches, no, definitely not," the former fast bowler had added.

As far as the squad is concerned, Cornwall, who bowls off-breaks and is a handy lower-middle order batsman made it.

Cornwall first played first-class cricket in 2014 and has 260 wickets from 55 first-class matches along with 2224 runs. He recently scored two half-centuries in two unofficial 'Tests' against India.

The 26-year-old couldn't be included earlier because of fitness issues.

"Rahkeem has been performing consistently over a long period of time and has proven to be a match-winner, so we believe his elevation to the Test squad is merited at this time," Robert Haynes, the head of CWI's interim selection panel, said

"We believe he can provide an attacking option to our bowling attack with his sharp turn and extra bounce. He can also lend a bit of depth to the batting, so we are looking forward to him coming into the squad and making a valuable contribution."

The selection committee head also informed that young pacer Alzarri Joseph, who got injured while playing IPL is still not ready for the rigours of the longer format.

"Alzarri is undergoing remedial work and we are monitoring his recovery," Haynes said. "But we do not think he is ready yet to last five days of a gruelling Test match. He represents a key part of West Indies future and we do not want to rush him back. We have two important series coming up later in the year in India and we want to be very careful how his recovery is managed," he said.