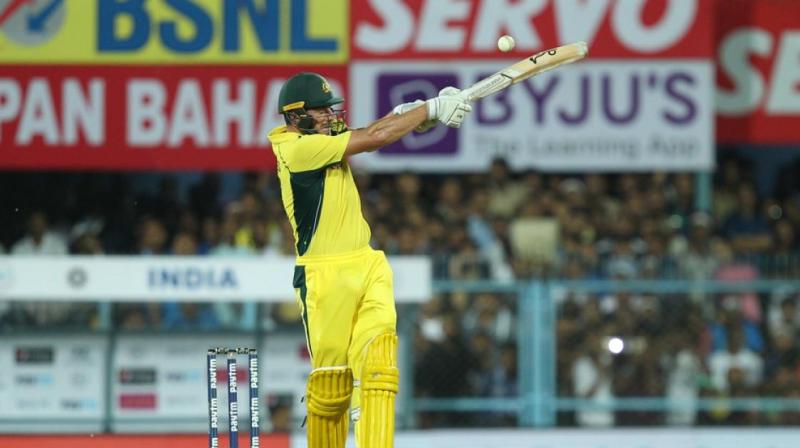 Guwahati: Australia completed an eight-wicket win over India in the second T20 match against India here on Tuesday, thereby levelling the three-match series 1-1.

Earlier in the match, Virat Kohli and co got off to a poor start, after Rohit Sharma and captain Kohli departed in the first over itself. India never really got a breakthrough during the innings, but managed to finish at 118. For the visitors, the man with the ball was Jason Behrendorff, who finished with a spell of 4-21 from four overs.

During Australia’s reply, Virat Kohli and co broke through early, after having removed openers David Warner and Aaron Finch. But from then on, the duo of Travis Head and Moises Henriques made sure that the visitors posted a hard-fought win.

Both the teams will now head to Hyderabad, where they will play the final match of Australia’s limited-overs series, the third T20.

Australia are inching closer to a series-levelling win here, as Head and Hernriques take the visitors towards 100.

The Aussies comfortably crossed the 50-run mark, with both Travis Head and Moises Henriques playing a crucial part in it.

As of now, India are in control of the game. They are doing their best to avoid Australia from getting to the target.

The Indian bowlers are doing a hard job there, as pressure has mounted on the Aussies. A worthy over from Bhuvneshwar Kumar, as he goes for just one run.

A good start by Bhuvneshwar Kumar, qas he just goes for six runs. Manish Pandey, in the third over, did a good job to stop the ball from going to the boundary, as he takes a diving effort

Australia have restricted India to a total of less than 130. The Aussie bowlers have done their part. Will India make a comeback, or will the visitors secure a win?

India got to the 100-run mark, as Hardik Pandya and Kuldeep Yadav took the hostsback in the game.

A good over for India in this. In the final ball, a no-ball by Andrew Tye proved to be costly as he went for four runs in the free-hit delivery

Nothing is going right for the Men in Blue as wickets continue to fall. With Jadhav having departed for 27, India's hopes will depend on the tail-enders.

Adam Zampa was introduced to the attack, and finishes his over on a good note, conceding just four runs.

MS Dhoni got off the mark, while Jadhav ensured that he and Dhoni will look to take India to a huge total.

India continued to struggle against David Warner's men as they lost Manish
Pandey in the third over.

This over has once again belonged to the visitors, who have conceded just four runs.

Australia have won the toss and have lected to field first. No changes for Virat Kohli's side, while Marcus Stoinis has replaced Dan Christian in the playing XI.

Guwahati: Virat Kohli-led Team India will hope to clinch the three-match T20 series against David Warner’s Australia when the two teams face-off at the Barsapara Cricket Stadium here on Tuesday.

The Men in Blue will come into this match with high confidence, following a domination in the ODI series, after which the hosts eased to a nine-wicket win in a rain-curtailed first T20 at the JSCA International Stadium Complex on Saturday.

After having restricted Australia to 118-8, the match was delayed by rain for more than an hour, after which India were set a target of 48 from 6 overs, which they chased down quite comfortably.

Just before the first T20, the Aussies had suffered a huge blow as captain Steve Smith decided to fly back home due to an injury, and make himself available for the Ashes in November. David Warner, though, will have an extra burden of captaincy due to Smith’s absence.

The main worry for the visitors, however, will be the form of all-rounder Glenn Maxwell, who has not had an impressive tour so far.

After having been dropped from the T20 opener, pacer Ashish Nehra will hope to get a game in the second T20 as the hosts look to continue their good form by sealing the T20 series.

The match is scheduled to start at 7 p.m. IST.