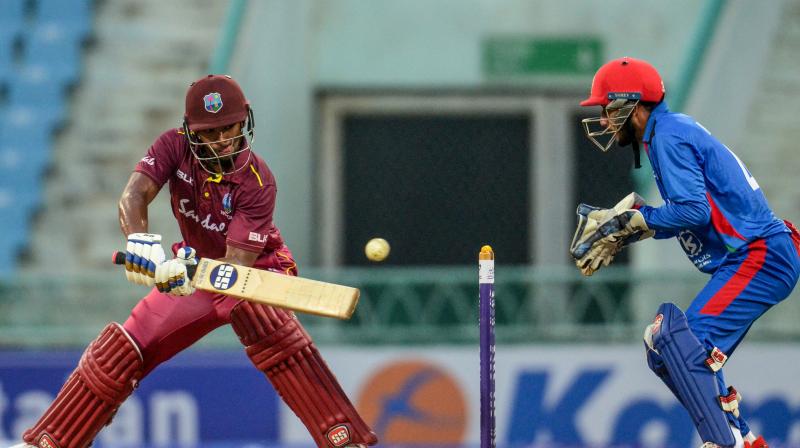 Nicholas Pooran scored highest runs for Windies as he played a knock of 67 runs before giving away his wicket to Naveen ul-Haq in the 50th over. (Photo:AFP)

Lucknow: West Indies won the second ODI of the three-match series by 47 runs against Afghanistan at the Ekana Cricket Stadium here on Sunday.

With this win, the Caribbean team won the series by 2-0 with one match left to play.

Chasing 248 runs, Afghanistan were bowled out on 200. The Afghan team suffered an early blow as they lost their opener Javed Ahmadi in the first over for a duck.

Hazratullah Zazai and Rahmat Shai built a 53-run partnership for the second wicket. Shah lost his wicket at the score of 33 due to miscommunication in running between the wickets with Zazai.

Mohammad Nabi and Najibullah Zadran built a partnership of 68-run for the sixth wicket which provided some hope to Afghanistan during the match.

After Nabi's dismissal, apart from Sharafuddin Ashraf (13), nobody was able to cross the double-figure mark as Rashid Khan (2) and Mujeeb Ur Rahman (0) were picked cheaply.

For Windies, Cottrell, Chase, and Walsh scalped three wickets each.

Earlier, West Indies asked to bat first and posted a total of 247/9 in the 50 overs.

Openers Evin Lewis and Shai Hope provided a steady start to the side and stitched a 98-run partnership for the first wicket.

Skipper Rashid Khan provided the breakthrough for Afghanistan as he caught Hope (43) in front of the wickets in 25th over.

In the next over, Lewis too departed off Javed Ahmadi after scoring 54 runs.

Shimron Hetmyer and Roston Chase played cautiously and added 31-run for the third wicket before the latter was dismissed by Mujeeb Ur Rahman in the 35th over.

Nicolas Pooran joined Hetmyer in the middle and built a brief stand of 19-run to get past the 150-run mark.

Pooran scored highest runs for Windies as he played a knock of 67 runs before giving away his wicket to Naveen ul-Haq in the 50th over.

The last match of the series will be played on November 11.