The teams were tied when England replied with 146-7 to New Zealand's 146-5 in a match shortened by heavy rain to 11 overs per side. 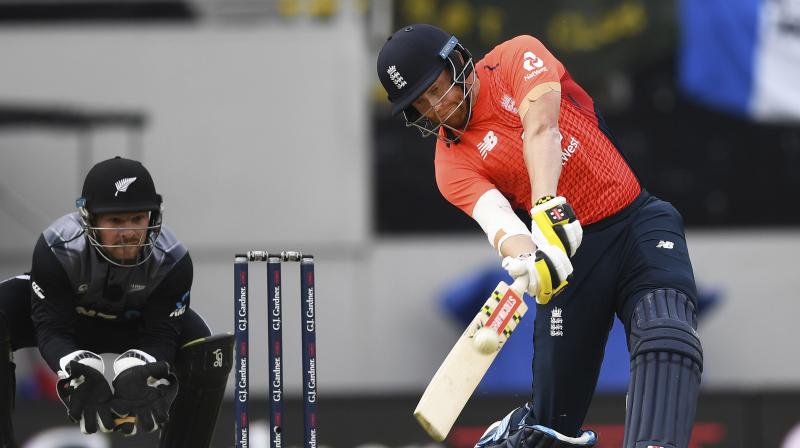 Auckland: England beat New Zealand in a thrilling Super Over finish to their rain-reduced Twenty20 cricket international Sunday, clinching a 3-2 win in the five-match series.

The teams were tied when England replied with 146-7 to New Zealand's 146-5 in a match shortened by heavy rain to 11 overs per side.

The match was reminiscent of the World Cup final between the teams in June when England won on a count back of boundaries after being tied at the end of 50 overs and again after the one-over eliminator.

This time England's performance in the tiebreaker was decisive.

Bairstow and Morgan both hit sixes to set New Zealand a chase for 18 runs, a total which was challenging even on the postage stamp boundaries of Eden Park.

New Zealand made the unusual decision to nominate wicketkeeper Tim Seifert to take the first ball of its Super Over, bowled by Chris Jordan. Seifert took two, left a wide, hit four and had a dot ball before falling to a brilliant catch by Morgan.

With New Zealand needing 10 runs from the last two balls Guptill could only manage a single from the first ball he faced and the match was over.

Bairstow was Man of the Match for his 47 from 18 balls which helped England match New Zealand's formidable 11-over total and for his contribution in the Super Over.

"To try to chase down 150 was tough but a lot of the guys played in the T10 last year and said we're not far off here. If we can get within striking distance and with the short boundaries we've got a chance."

Bairstow said the close finishes in recent matches against New Zealand had been nerve-wracking.

"We don't want to keep this happening, I don't think anyone wants to keep that going," he said. "But it just shows how close the sides are and how close they've been throughout the series."

After England won a rain-delayed toss and sent New Zealand into bat, Martin Guptill blasted 50 from 20 balls to launch the home side towards a competitive total. New Zealand was 37-0 after only two overs and reached 100 in only 7.3 overs.

England, in contrast, made a poor beginning, losing Tom Banton and James Vince within the first seven balls.

Bairstow's innings put it back in the match and England came into the last over needing 16 runs to win.

Jordan struck a crucial six from the bowling of Jimmy Neesham, then hit a four from the last ball to tie the scores and send the match into the one-over eliminator.