She achieved the feat during the first T20I against West Indies here at the Daren Sammy National Cricket Stadium. 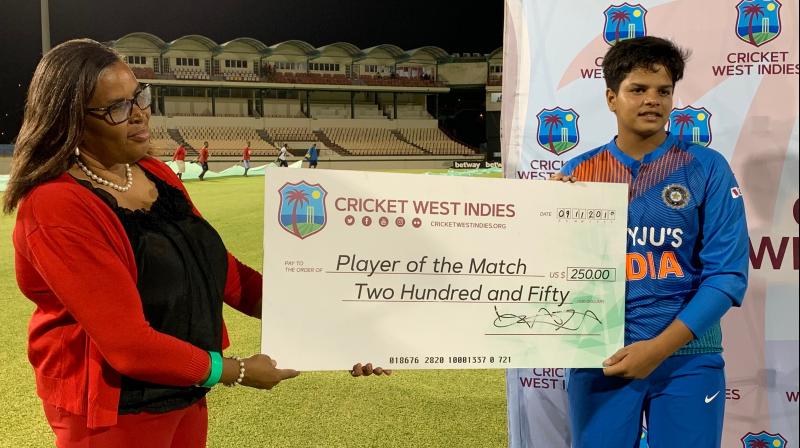 She achieved the feat during the first T20I against West Indies here at the Daren Sammy National Cricket Stadium.

Shafali smashed 73 runs in 49 balls to register her maiden fifty in T20Is and was adjudged as the player of the match.

In the first T20I, India women thrashed West Indies by 84 runs and have gained a 1-0 lead in the five-match series.

After being sent to bat first, India women got off to a brilliant start as both the openers, Shafali and Smriti Mandhana, struck regular boundaries. Both smashed half-centuries and formed a 143-run partnership. It was the highest partnership in T20Is for India Women.

Shakera Selman provided the hosts with a much-needed breakthrough in the 16th over as she got hold of Shafali (73). In the next over, Mandhana (67) too was sent back to the pavilion.

However, their scintillating partnership set the base for the upcoming batters and India scored 185 runs from 20 overs, highest team total by any side against West Indies.