The rubber is locked 1-1 after two-time world champions West Indies turned on the style in the second T20 International. 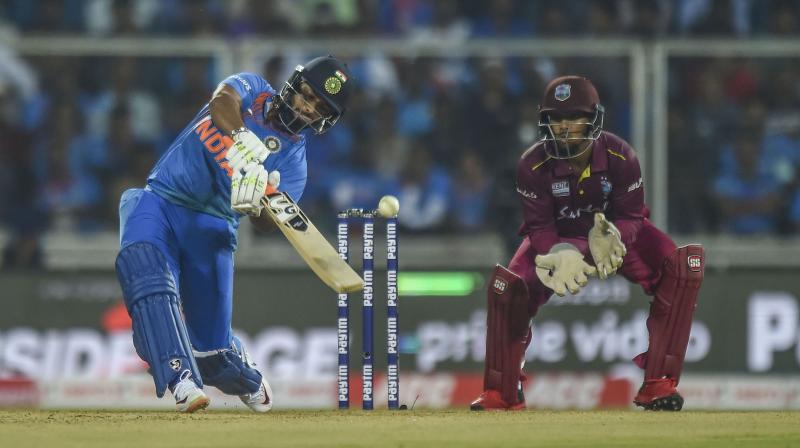 India will have to address the many inadequacies laid bare by a resolute West Indies in the second T20 International when the two teams made up of power-hitters square off in what promises to be an enthralling series-finale here on Wednesday. (Photo:PTI)

Mumbai: India will have to address the many inadequacies laid bare by a resolute West Indies in the second T20 International when the two teams made up of power-hitters square off in what promises to be an enthralling series-finale here on Wednesday.

The rubber is locked 1-1 after two-time world champions West Indies turned on the style in the second T20 International in Thiruvananthapuram following a Virat Kohli special in the lung-opener in Hyderabad.

For India, the focus will once again be on young guns like off-spinner Washington Sundar and under-fire wicketkeeper-batsman Rishabh Pant.

The spotlight on Pant, especially, has been obsessive and it is expected to be no different when the team takes the field at the Wankhede Stadium.

As for Sundar, it would be interesting to see whether the team management persists with him or gives chinaman bowler Kuldeep Yadav a game.

Sundar has taken only three wickets in the last five T20s that he has played (two against West Indies and three against Bangladesh) and leaked 144 runs in 23 overs that he bowled.

He also ended up wicket-less in the two T20 Internationals against South Africa.

Sundar's fielding is another aspect about which skipper Virat Kohli would be worried. In the last game, he dropped a sitter of Lendl Simmons, whose 45-ball 67 laidthe foundation of the West Indies' eight-wicket triumph.

Kuldeep last played a T20 against New Zealand in Hamilton back in February. He warmed the benches in the first two games.

For Pant also things are only getting tougher. The focus on him has been unrelenting and it won't be easy for him to regain the early form that made him seem like Mahendra Singh Dhoni's heir apparent.

His last T20 fifty came against West Indies in August, in Providence. With the likes of Sanju Samson waiting in the wings, Pant will have to come good sooner than later.

But in overall analysis, India's batting has never been a problem. Opener Rohit Sharma, who had a rare-twin failure, would be raring to go before his home crowd.

K L Rahul and skipper Kohli are also among the runs. Shivam Dube, who slammed his maiden T20 fifty, showed he can hit towering sixes and he would want to perform before his home crowd and so Shreyas Iyer.

However, bowling is a slight concern. A profligate pace duo of Deepak Chahar and Bhuvneshwar Kumar leaked runs in the first two matches.

Chahar had a memorable series against Bangladesh but has not managed to repeat the show this time around. With Mohammed Shami around, Chahar will have to step up.

Also, India's fielding was way below par. The dropped catches and several mis-fields prompted Kohli to say if the performance does not improve, no score would be enough.

The hosts are also good chase-masters but will need to learn how to defend targets.

On the other hand, West Indies will also fancy their chances to clinch the series after the terrific comeback.

Their top-order batsmen, particularly Simmons, are in splendid form. Also the likes of Evin Lewis, Nicholas Pooran and Shimron Hetymar are among the runs and they will look to continue the form.

Add to it, the firepower of Brandon King, Jason Holder and skipper Kieron Pollard, the West Indies can look unbeatable on their day.

Even their bowlers, including pacer Sheldon Cottrell, are among the wickets. Along with Cottrell, Kesrick Williams, leg-spinner Hayden Walsh Jr and Holder, will have to bowl in the right areas to stem the flow of runs.

The West Indies also have fond memories of playing T20s at the Wankhede as in the 2016 ICC World Cup semi-final, they defeated India and went on to win the title.