Cottrell has been the most economical bowler for the West Indies. In this series, the pacer scalped two wickets at an economy of just 6.37. 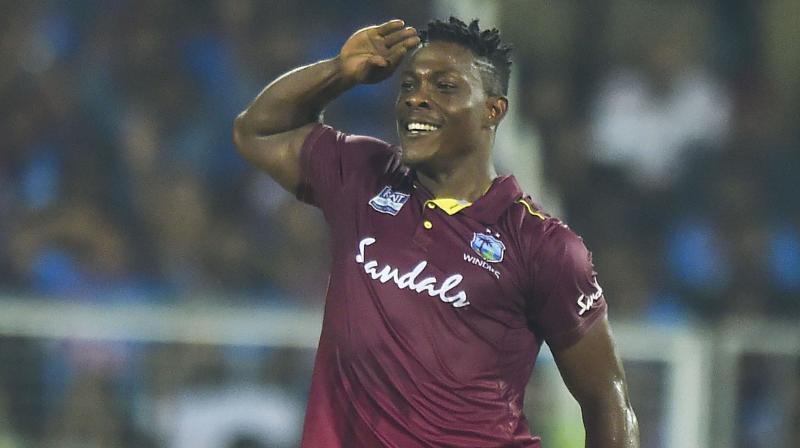 Ahead of the final T20I against India, West Indies coach Phil Simmons on Tuesday hailed Sheldon Cottrell saying that the bowler has been 'brilliant' in the series. (Photo:AFP)

Mumbai: Ahead of the final T20I against India, West Indies coach Phil Simmons on Tuesday hailed Sheldon Cottrell saying that the bowler has been 'brilliant' in the series.

Cottrell has been the most economical bowler for the West Indies in this series. He has taken two wickets but has leaked runs at an economy of just 6.37.

"I think he is brilliant and for the last two years he has been brilliant for West Indies in white-ball cricket," Simmons told reporters.

"He swung a lot in Trivandrum but didn't control it. So I hope he controls it in the coming game as he is a valuable asset to the team," he added.

West Indies skipper Kieron Pollard has been the key cog in the batting wheel of Indian Premier League franchise Mumbai Indians for the past ten years.

Simmons believes that Pollard's experience will benefit the visitors in the third T20I.

"The experience he has got from here is invaluable and he is been here for ten years and that will definitely help our young bowlers," said Simmons.

Bowler Fabian Allen, who hasn't played a single match in the series will also miss the third T20I.

"He is still not fit to play tomorrow, he is a big miss for us because he is an excited player," said Simmons.

The first ball of the over was dispatched for a boundary. The next ball was then flicked for a six on the leg side.

It was then that Kohli brought out the notebook celebration and Williams looked on in amusement.

In 2017, Williams had given Kohli a 'notebook-style' goodbye after taking his wicket and Kohli had clearly not forgotten about that.

"The banter has been good. Its been interesting and let's see who wins tomorrow," said Simmons

The two teams will lock horns in the series decider on December 11.