Pat Cummins' return to red-ball cricket was seen as confirmation of his availability for the Ashes in the coming home summer. 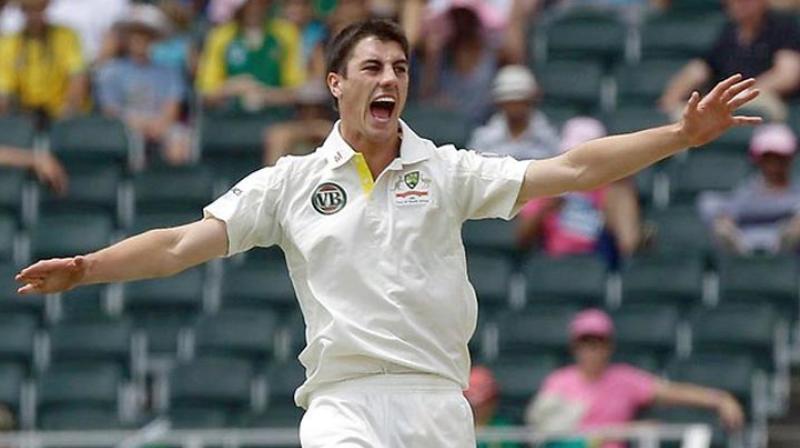 Pat Cummins has not played a Test since his stunning 7-wicket debut against South Africa as an 18-year-old in 2011. (Photo: AP)

Melbourne: Pat Cummins is in sight of a long-awaited second Test after being rushed into the Australia squad to replace injured pace spearhead Mitchell Starc for the remainder of the series in India.

Cummins has not played a Test since his stunning seven-wicket debut against South Africa as an 18-year-old in 2011 but he made a successful return to first-class cricket for the first time in six years this week with a man-of-the-match performance for New South Wales in the domestic Sheffield Shield.

Jackson Bird is the back-up paceman in the touring squad, but 23-year-old Cummins is likely to be selected for the third Test in Ranchi starting next week, with the tense four-match series poised at 1-1.

"In selecting Pat, we were looking for a strike bowling replacement option (for Starc)," selector Trevor Hohns said in a media release on Saturday.

"Pat has impressed in his return to cricket this summer with consistent performances in his ODI, Twenty20 International and Big Bash matches.

"He has also had a very good Sheffield Shield return for New South Wales."

Long touted as a future leader of the pace attack, the Sydney-born right-armer was the youngest Australian cricketer to earn a national contract in 2011-12 but has been beset by injuries since his brilliant Test debut at the Wanderers.

Selectors have been loath to risk the tall seamer in long-form cricket, easing him back through the shorter formats until his return for New South Wales this week.

He underlined his huge potential with an eight-wicket haul to fire the state side to a comfortable home win over South Australia on Saturday.

His return to red-ball cricket was seen as confirmation of his availability for the Ashes series against England in the coming home summer.

However, Starc's series-ending stress fracture injury changed the landscape and Steve Smith's side is desperate to rebound in Ranchi after their fourth innings collapse in Bangalore squared the series.