Also it will give IPL players in the league good practice before the mega-event starts on April 7. 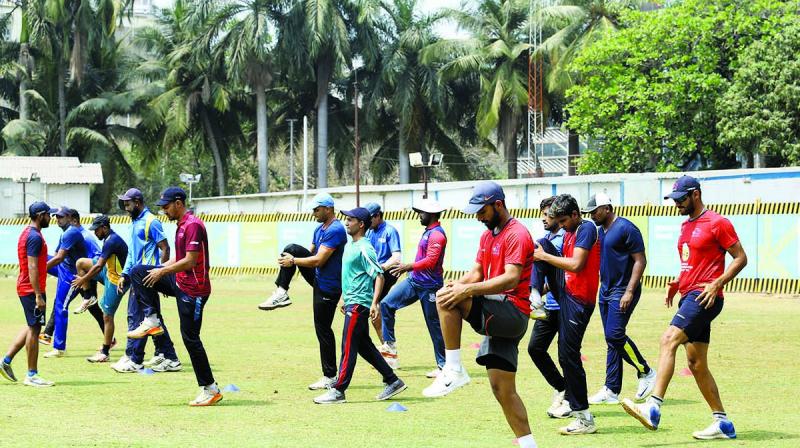 North Mumbai Panthers in the midst of a practice session

After a prolonged wait, the Mumbai T20 League is finally starting at Wankhede stadium from Sunday. The League which had been planned from many years, was to take off early in January before the Indian Premier League auction, but it got delayed.

Finally,  it is happening from March 11 to 21 after High Court didn’t stay the League on couple of writ petitions challenging its validity on different grounds, including one petition by Mumbai Cricket Association member Nadim Memon.

With the IPL auction already over, the league will give fringe players a platform to get noticed ahead of the next domestic season. Also it will give IPL players in the league good practice before the mega-event starts on April 7.

Probability Sports and MCA have roped in legendary players like Sachin Tendulkar as brand ambassador, Sunil Gavaskar as League Commisioner and Dilip Vengsarkar as Chief Mentor. The League is live on SonyEspn and a healthy crowd, especially on weekends is expected in the stands to support their local stars.

The Ajinkya Rahane-led North Mumbai Panthers will meet Arcs Andheri in the opening encounter of the T20 Mumbai League. Mumbai North West has Rohit Sharma as icon player who will be available only if his Andheri-based team make it to the playoffs.

In the first match, Rahane who is a regular in the Indian Test side and has considerable experience playing in the IPL, will be the star attraction.

Shaw will feature only in a part of the tournament as he is set to play for Rest of India in the Irani Cup match against Ranji Trophy Champions Vidarbha at Nagpur from March 14.

Though Arcs Andheri will be without Rohit, who is currently leading India in the T20 tri-series in Sri Lanka, they have an experienced campaigner in Iqbal Abdullah, who will lead the side. Besides, they have in-form Mumbai allrounder Shumbham Ranjane and medium pacer Tushar Deshpande in their ranks. Left-handed opening batsman Akhil Herwadkar will be a doubtful starter. Former Kenyan cricketer Tanmay Mishra is the second World Cupper in the squad after Rohit. Former Mumbai batting mainstay Amol Muzumdar is Arcs Andheri mentor and Omkar Salvi is coach.

The Sobo Supersonics skipper Nayar was in supreme form in the recently concluded DY Patil T20 Cup while representing finalists BPCL and he will like to carry it forward. Opening batsman Jay Bista, who was bought for five lakhs, one lakh more than his skipper, will be eager to show his worth.

Left-arm spinner Harmeet Singh is on a comeback trial. They also have other Mumbai players like Badre Alam, Rohan Raje, Bhavin Thakkar and  Dhrumil Matkar. Former India pacer Zaheer Khan is the team’s mentor and Amit Dani is coach.

Triumph Kings will miss injured Dhawal Kulkarni, but they have a dynamic skipper in Yadav. Also they have utility players like Aditya Dhumal, Akash Parkar, Praful Waghela, Shashank Singh, Parikshit Valsangkar and youngster Vinayak Bhoir in their squad.