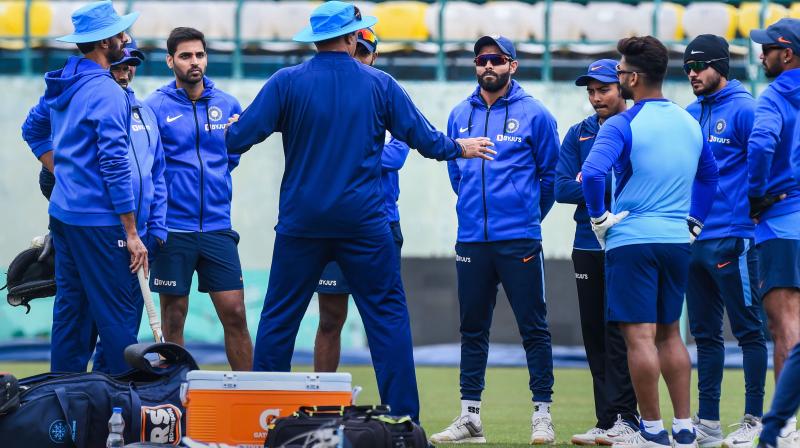 Indian cricket team during a practice session ahead of the first ODI against South Africa in Dharamshala on Wednesday. PTI Photo

Dharamsala: The BCCI medical team on Wednesday told India players to avoid eating out and mingling with fans seeking selfies in the wake of the novel coronavirus outbreak when they take on South Africa in an ODI series starting here on Thursday.

The reported number of positive cases for COVID-19 in India stands at 60 and the BCCI's medical team held a briefing for the Indian side ahead of the first ODI against South Africa at Dharamsala.

"The BCCI medical team has been monitoring the current coronavirus (COVID-19) situation. All the players, team support staff, State Associations have been briefed about the standard guidelines issued by WHO as well as the Ministry of Health & Welfare - Government of India," the BCCI said.

The guidelines are expected to be followed at the upcoming IPL, starting March 29. The coronavirus outbreak has so far led to the postponement of the shooting World Cup and the Indian Open golf tournament in India.

The players have been given a list of Dos and Don'ts on personal hygiene and the list includes but is not limited to telling them to "avoid eating out at restaurants where hygiene standards are unknown or compromised."

The players have also been told to "avoid close contact and interaction with individuals outside the team environment (to avoid cross-infection from unknown individuals)."

The guidelines also tell the players to avoid handshakes and handling unknown phones for selfies.

The BCCI has also asked the airlines, team hotels, state associations and medical teams to sanitise facilities before and during team use.

"All the public washrooms at the stadium will be stocked with hand wash liquids and sanitisers. The medical staff and first aiders at the stadiums will be keeping a record of all patients seeking treatment and follow up as may be necessary," the BCCI said.