Kieron Pollard's 31-ball 83 decimated Punjab but the visiting side also had its share of stellar batting performances, by Gayle and Rahul. 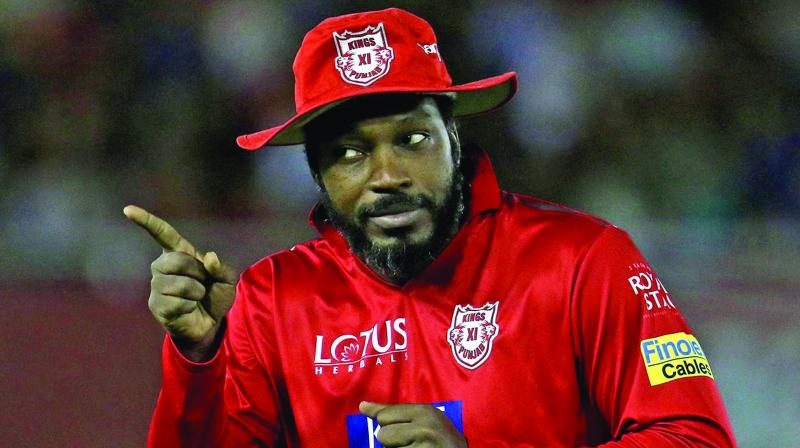 Gayle did not take the field during Mumbai Indians' successful run chase and KXIP coach Sridharan Sriram also said the Jamaican needs to be monitored over the next few days. (Photo: File)

Mumbai: Kings XI Punjab captain Ravichandran Ashwin says the team's in-form swashbuckler Chris Gayle "twisted his back" during the three-wicket loss to Mumbai Indians in an IPL game which required his side to be "steelier and smarter" than what it was.

Kieron Pollard's 31-ball 83 decimated Punjab but the visiting side also had its share of stellar batting performances, by Gayle (63 off 36 balls) and K L Rahul (100 not out off 64 balls).

"He (Gayle) said he twisted his back. We have to go check and how he is," Ashwin said of the 39-year-old destructive West Indian batsman.

Gayle did not take the field during Mumbai Indians' successful run chase and KXIP coach Sridharan Sriram also said the Jamaican needs to be monitored over the next few days.

"He felt a twitch in the back - that's what he said. We need to assess and monitor what he's going to do over the next couple of days," he said

In another injury worry for KXIP, Ashwin said medium pacer Ankit Rajpoot, who went for 52 runs in his four overs yielding just one wicket, has a niggle too.

"He (Ankit Rajpoot) injured his finger in the first over. It was a big bonus that we got three overs from him in the powerplay. We were a bit up and down with our fielding and catching," Ashwin said assessing the team's performance after seven matches, four of them wins.

"Probably if we would have been sharper, we would have ended up on the right side. I think it was a defendable total. It was just about par. It is a hard defending ground," said the senior off-spinner when asked whether 197 was a big enough total.

Ashwin felt the team lost momentum after a great start but conceded that Pollard was the major difference between the two sides.

"We were about 10s for 10-12 overs and then we lost a little momentum while batting which I feel was crucial for us. I thought we pretty good as a bowling unit in bits and pieces," he reflected.

"At the end of the day Pollard batted beautifully and took the game away from us...We could have been a little more steelier and smarter with our plans," he said.