Can Proteas break their World Cup jinx and lift the World Cup without De Villiers?

The last time the Proteas had managed to win any big tournament was way back in 1998. 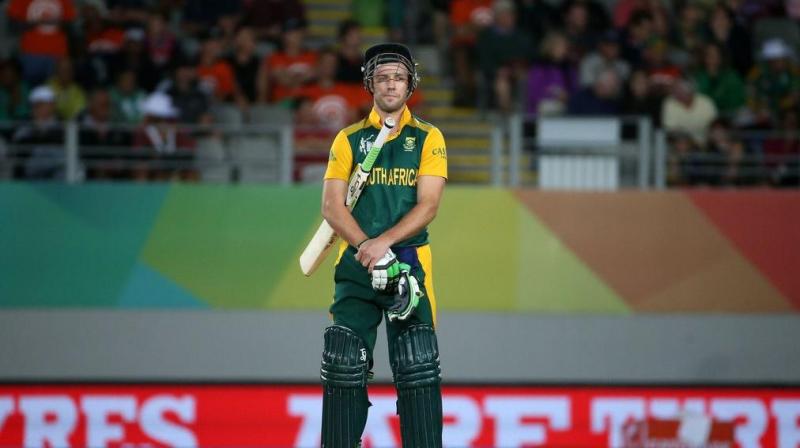 However, when it comes to mega tournaments like the ICC cricket World Cup – history has proven how inconsistent and incapable the South African team is when it comes to handling pressure. (Photo:AFP)

Mumbai: As the South African cricket team gears up for the 2019 World Cup, it’s time we started highlighting their strengths. There is no doubt that the the Proteas can defeat anyone in any bilateral series or tri-series.

The last time the Proteas had managed to win any big tournament was way back in 1998 when the Hansie Cronje-led team lifted the inaugural ICC Champions Trophy (back then, the ICC Knockout Trophy) after defeating the West Indies by four wickets. The Proteas lifted the prestigious trophy by chasing down a target of 246 within the quota of 50 overs.

However, since the Hansie Cronje’s team won the trophy in 1998, the Proteas team has choked at ICC tournaments. The African team’s success since lifting their maiden ICC accolade has been overshadowed by its failure to capture its maiden ICC World Cup title.

No cricket fan even remembers if the team has ever won any ICC titles. The team, besides having failed at the biggest tournament of the cricketing world, has also been living under the shadow of rains. Rain has been the biggest nemesis for the African cricket team.

In 1992, rain played spoilsport for the Africans as the cruel Duckworth Lewis Stern method (DLS) showed them the door. The venue was Sydney, and the opposition was England, and at the end the Proteas needed just 22 runs from seven balls, until the rain intervened.

Following the interruption the scoreboard read 21 runs required from just one ball and hence the rain shattered the team’s dream of reaching the finals. Since that match, the team earned the ‘chokers’ tag for itself.

In 1996, the Proteas reached the quarter finals only to be knocked out by the Caribbean (West Indies) team, hence dooming their hopes of claiming the biggest prize.

In 1999, the African team came back stronger and reached the semifinals, which was tied after both teams ended up with 213. Unluckily, the African team had to exit the tournament because the Australians defeated South Africa in the Super Six round, and got into the finals.

Although, for South Africa, the match was theirs to win, until Allan Donald miscommunicated with Lance Klusener, and got himself out only to shatter their World Cup dreams again.

At the 2003 World Cup, the host nation failed to impress again as they crashed out from the tournament after winning 3 out of 6 matches, and miscalculating a run chase in a rain-influenced match versus Sri Lanka.

In 2007 the African unit fared well as the team progressed to the semi-finals. Nevertheless, the Proteas bowed down to a mighty Australian side, which went on to chase an easy target of 150 set by Graeme Smith’s team.

During the 2011 World Cup, it looked all set for the Proteas to take away the prized trophy, having won 5 of the 6 group stage matches. The team also defeated the two-time World Cup Champions from Asia, India.

Nonetheless, when they faced New Zealand, the Graeme Smith-led team got bundled out for a paltry 172 while chasing a modest total of 221 set by the Kiwis. No one could’ve thought that a team full of world class players like Jacques Kallis, Graeme Smith, Herschelle Gibbs, AB De Villiers could crumble under pressure.

Cricket crazy fans, especially fans of AB De Villiers, would remember how painful and heartbreaking it was for AB to see his team exit from the 2015 World Cup, and especially after putting so much effort which literally went in vain as the rain came in to help the Kiwis advance to their maiden final. De Villiers and Morne Morkel, unable to bear the loss, cried on the pitch.

AB, the wall in the Proteas side:

AB De Villiers had debuted in international cricket in 2003-04. Back then, no one knew who Mr 360 was until 2008-09 when he saved the Proteas from the jaws of defeat against the rampaging Australian side by scoring a crucial 63. The African side boosted by AB’s presence won the Test series down under.  Since then AB has been on the rise.

Many cricket fans still remember ABD’s quickest fifty in a World Cup against the West Indies side. While when it comes to playing Test match, Mr 360 can turn himself into Mr Wall, especially when his team is in a fixer upper situation. De Villiers once played 220 balls to score 33 runs just to save his team from being defeated in a test match.

ABD’s two year gap from international cricket meant a lot for the South African team. However, when he came back, and joined the team, the Proteas side got revived as after losing the first Test the Faf Du Plessis side failed to gain an edge over the Aussies in the second Test. After AB’s inclusion in the team the Australians got bowled out for 243 in the first innings. That’s how AB influences his team.

On a scorecard South Africa's line-up will be disappointed, one man who stood still was the same man who was put way above the others. AB de Villiers showed yet again how much South Africa needs him.  And AB just needed two balls to prove that.

After Nathan Lyon picked up two wickets in four balls in his first over, de Villiers calmed down the tension as he defended the final ball and then went down the pitch to whip the first ball of Lyon's second over through midwicket. That's AB de Villiers for you.

During that match, barring De Villiers, the rest of the South African batsman were totally rattled by the likes of Mitchell Starc, Josh Hazlewood, and Pat Cummins. As wickets tumbled down at the other end, De Villiers remained constant.

The Proteas team was about to pack up after having scored 227 at the loss of seven wickets. Though, at that time De Villiers was batting on 53. For the South African team, Villiers was like a wall, which couldn’t be brought down. De Villiers’ knock was a game changer for the Proteas as he went on to score an unbeaten 126 which pushed the hosts to post a decent total of 382. That knock of De Villiers altered the course of the match which helped them to level the series 1-1.

There’s nothing the superman of cricket can’t do – AB has done it all – be it breaking batting records, taking inhuman catches, keeping behind the stumps, leading the team from the front till bowling whenever required. But what De Villiers couldn’t achieve was lifting the coveted ICC World Cup trophy.

In an interview, South Africa's coach, Ottis Gibson, after the series against Zimbabwe, said that the experimentation time before 2019 cricket world cup is nearing its end.

While scrutinising the probable XI for the world cup, except two positions, South Africa’s squad looks sorted. Here are some players who are confirmed and who might have a chance. Hashim Amla, Quinton De kock have been one of the most fabulous opening pairs in the shortest format. Reeza Hendricks, Faf du Plessis, David Miller and the young in-form Van der Dussen make a firm and solid middle order.

Aiden Markram is another potential player, who has been termed as a great talent in all formats and has the figures to justify the hype. Markram has a first class average of 47.73 and also registered his highest individual score - 183 off 138 balls - in a franchise List A match.

However, since he assumed the charge as ODI captain for the series versus India, Markram has not lived up to his standards and Coach Gibson has observed that.

There were some rumours which stated AB de Villiers might come out of his retirement; if this rumour comes true then this will be a big boost for the Proteas as they badly need AB’s aggressiveness and creativity to show their strength over other quality teams.

The pace department is filled with  quality as they have the likes of Dale Steyn, Kagiso Rabada, Lungi Ngidi, who have shown their class in the recently concluded ODI series against Pakistan.

This year’s Proteas squad can surely be termed as one of the top contenders to contest for the biggest cricket trophy, but one important thing for them is not to falter under pressure.

However, despite their ability to choke under pressure, the Proteas has entertained the cricketing world by producing quality players like Allan Donald, Jonty Rhodes, Shaun Pollock, Graeme Smith, Hashim Amla, Dale Steyn and our beloved ABD Villiers.

And, as a cricket fan it would be unfair to call them ‘Chokers’, though one might call them unlucky.   There have been other teams also that have progressed to the quarter final multiple times but failed to lift the trophy. One never knows 2019 can be South Africa’s year.