The Kings XI Punjab opener scored unbeaten 100 after playing 64 balls with six boundaries and as many sixes. 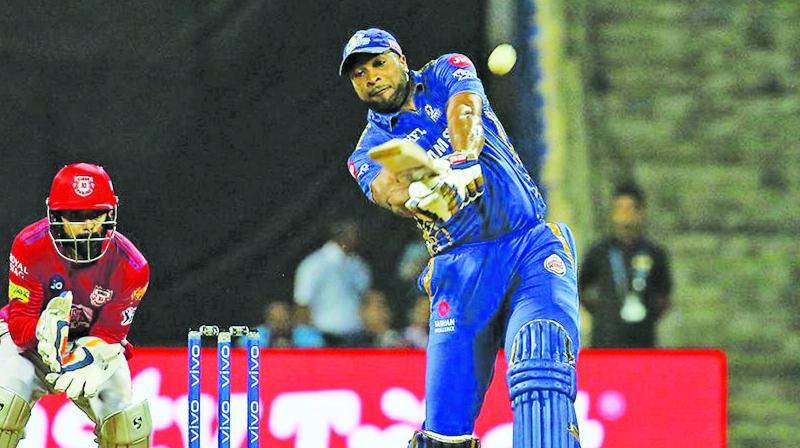 Mumbai: Kieron Pollard led from the front to guide Mumbai Indians to their third consecutive victory at Wankhede Stadium on Wednesday.

The stand-in skipper’s 31-ball 83 floored Kings XI Punjab after the hosts required mammoth 198 to win and were struggling at the half way mark at 65/3, but eventually MI won by three wickets.

Coming up the order at No 4, Pollard took the responsibility to take Mumbai closer single-handedly and finished the job clinically.  He hit 10 massive sixes and three boundaries.

The breathtaking knock came after KL Rahul scored unbeaten hundred to send timely reminder to Indian selectors who meet here on Monday to pick the Indian squad for the ICC World Cup in England.

Rahul was involved in 116-run opening stand with Chris Gayle in 77 balls. Rahul played his shots early on but was overshadowed by Gayle storm that engulfed the Wankhede for first 12 overs. Gayle scored 36-ball 63 studded with seven sixes and three boundaries to enthrall the crowd. Mohammad Shami had a good day with the ball picking three wickets for just 21 runs but rest of Kings XI bowlers went for runs.

Put into bat by Pollard after Rohit Sharma missed the game due to injury, Kings XI had a quiet start. After 11 runs in first three overs, Rahul’s wristy six of Alzarri Joseph set the tune before Gayle launched himself with three sixes and a four of otherwise miserly Jason Behrendorff.

Kings XI were cruising and Gayle was hitting sixes through on side and over the bowlers head at will.