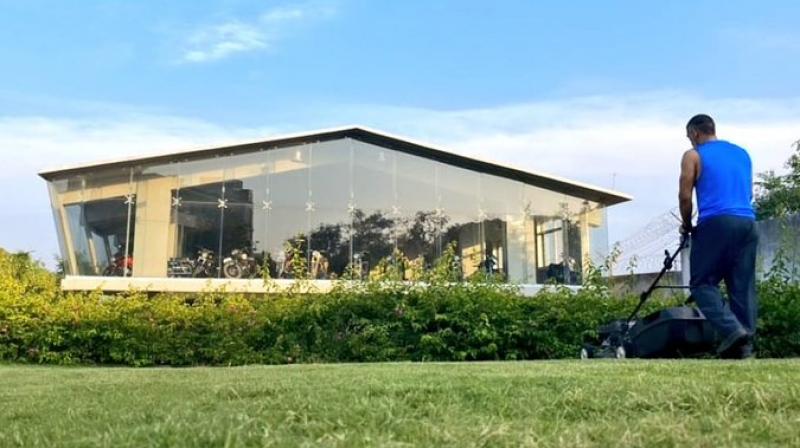 Dhoni mowing the lawn at his house. CSK Twitter Photo

New Delhi: As the whole country grapples with coronavirus crisis, wicket-keeper batsman MS Dhoni on Friday decided to mow his lawn to do something productive in this self-isolation period.

Dhoni's IPL franchise Chennai Super Kings (CSK) shared the photo of him mowing the lawn and captioned the post as: "Lawn time, no see!#Thala #WhistlePodu".

Dhoni was slated to return to the cricket field on March 29 in the IPL's opening match between Chennai Super Kings and Mumbai Indians.

However, the tournament was postponed until April 15 as a precautionary measure against coronavirus.

Thirty-eight-year-old Dhoni has been currently enjoying some time away from the game. He last played competitive cricket during the 2019 World Cup.

Dhoni had to face criticism for his slow batting approach during India's matches in the tournament.

Earlier this year, Dhoni did not find a place for himself in the BCCI's centrally contracted players list.

BCCI had released the list of central contract list of players for the period from October 2019 to September 2020.

Dhoni is the only captain to win all major ICC trophies (50-over World Cup, T20 World Cup, and Champions Trophy).

During his leadership, India also managed to attain the number one ranking in Test cricket.

Chennai Super Kings has also managed to win the tournament three times under his leadership.