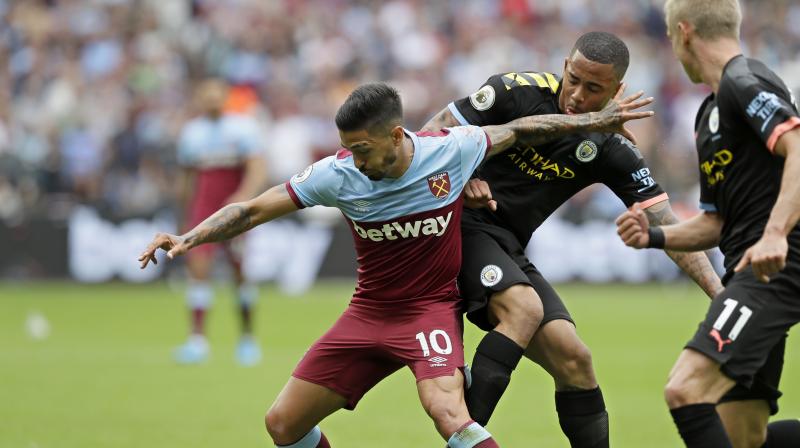 Brazilian Gabriel Jesus, preferred to Sergio Aguero in attack, opened the scoring in the 25th minute and Sterling made it 2-0 six minutes after the interval with a cool finish after being put through by Kevin De Bruyne. (Photo:AP)

London: Champions Manchester City delivered an emphatic statement of intent with a 5-0 thrashing of West Ham United as they began their bid for a hat-trick of Premier League title on Saturday.

There were also impressive wins for Burnley and Brighton & Hove Albion on the opening Saturday of the season while Sheffield United marked their return to the Premier League by picking up a point at Bournemouth.

Champions League winners Liverpool, who finished one point behind City in an epic title race last season, lit the touchpaper at Anfield but Pep Guardiola’s City, as they seemingly always manage to do, stole the limelight.

Brazilian Gabriel Jesus, preferred to Sergio Aguero in attack, opened the scoring in the 25th minute and Sterling made it 2-0 six minutes after the interval with a cool finish after being put through by Kevin De Bruyne.

Jesus became the first player to have a goal disallowed by the Video Assistant Referee (VAR) in the Premier League when, in the 53rd minute, he finished off Sterling’s pass following a fine move. However, the VAR adjudged Sterling had been offside.

VAR, making its Premier League debut this season, was used again to review and validate Sterling’s second and the video staff were busy again in the 84th minute when Aguero’s soft penalty was saved but VAR ruled that Declan Rice was encroaching into the box and referee Mike Dean ordered a re-take.

The Argentine scored before Sterling completed his hat-trick in stoppage time — the first player to do so on the opening weekend of the Premier League since Didier Drogba in 2010.

City have now won 15 Premier League games in a row.

“I cannot deny it, I’m delighted to win 5-0 away from home in the first game,” said Guardiola, who felt his side had been sloppy in the first half at the London Stadium.

“The rhythm was not there but that’s normal for the first game. In the second half we were better, we were more calm, we played extra passes. After we went 3-0 up the game was over.”

Tottenham were playing at home on the opening weekend for the first time in eight seasons but Villa, back in the top flight after a three-season absence, led through John McGinn’s ninth-minute strike and hung on grimly.

That condemned Villa captain Jack Grealish to his 19th Premier League defeat in a row, the longest losing run of any player in the competition’s history.

Brighton made an excellent start under new boss Graham Potter with a surprise 3-0 win at Watford — thanks to an own goal from Abdoulaye Doucoure and second-half strikes by forwards Florin Andone and Neal Maupay.

Ashley Barnes struck twice as Sean Dyche’s Burnley beat Southampton 3-0 in a meeting of two of last season’s strugglers at a wet and windswept Turf Moor.

Icelandic winger Johann Berg Gudmundsson added the third on a disappointing day for Ralph Hasenhuttl’s side.

Local boy Billy Sharp came off the bench for Sheffield United to earn a share of the spoils in their first Premier League game since 2007 as they drew 1-1 t Bournemouth. Defender Chris Mepham had put the Cherries ahead in the 62nd minute.

Everton’s investments have raised hopes of a top-six challenge but they had to settle for a point at Crystal Palace after missing a series of chances in a 0-0 draw.