While Kohli's 183-ball innings had 16 fours, Rahane also had eight hits to the fence in 161 deliveries. 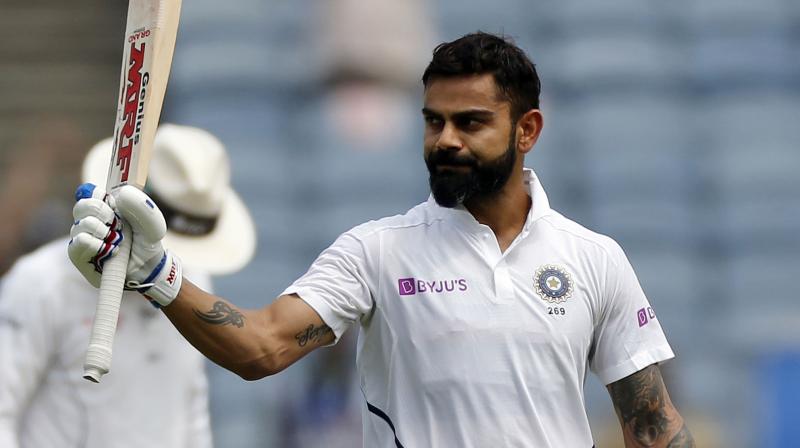 Pune: Skipper Virat Kohli blended grace with sheer determination on way to his 26th Test hundred, leading India to 356 for 3 at lunch on day two of the second Test against South Africa here on Friday.

Kohli, during his unbeaten 104, was an epitome of concentration and with the dependable vice-captain Ajinkya Rahane (58 batting) for company, grinded the South African attack in the wicketless session that could well give India the decisive upperhand in the game.

A beautiful straight drive off Vernon Philander brought up Indian captain's 69th international hundred and the celebration was more about contentment than elation.

Not for once did he look in any sort of hurry to complete the milestone as he respected the good deliveries.

The Kohli-Rahane duo added 158 runs for the unbroken fourth wicket stand and South Africa will certainly feel dejected as their bowlers put up a good show even though the scoreboard suggested otherwise.

While Kohli's 183-ball innings had 16 fours, Rahane also had eight hits to the fence in 161 deliveries.

Credit to the India skipper and his deputy for the manner in which they negotiated the first hour.

Kohli, in particular, was leaving anything that Rabada bowled on the off-stump channel for the first few overs. The only blemish was fishing at an away swinger from Philander, which a diving wicketkeeper Quinton de Kock failed to latch on to.

The bowler's back-drive off Rabada came soon after as Kohli started opening up. Anrich Nortje also again tried to bowl short but Kohli played his trademark short-arm pull in-front of the wicket.

Kohli entered into the 90's by deliberately opening the face of his bat and using the pace in Nortje' delivery to get a boundary in the third man region.

Nortje's extra pace was also well-utilised by Rahane also as he rode the bounce to play a couple of square cuts.

Having survived a DRS appeal off Keshav Maharaj's innings, Rahane finally completed his 20th half-century with a single off Nortje's bowling.