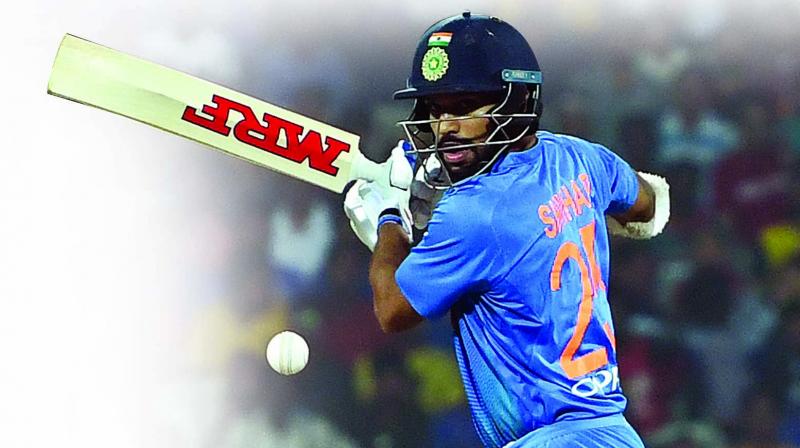 Chennai: Rishabh Pant made a statement at MS Dhoni’s ‘home turf’ as India made a clean sweep of the three-match T20I series against West Indies here at the M.A. Chidambaram Stadium on Sunday. Fans at Chepauk have witnessed quite a few finishing acts of Dhoni and it was the turn of Pant, who made it to the squad as a replacement for the ageing superstar, to showcase his skills on Sunday.

Shikhar Dhawan top-scored with an unbeaten 90 — his first half-century in the limited-overs leg of Windies series — but it was Pant’s 58 off 38 balls that gave an impetus to India’s successful chase of 182, achieved off the final ball. India required five runs in the last over, but Dhawan was dismissed off the penultimate ball when the scores were level. Manish Pandey sealed the thriller in India’s favour by taking a tight single towards mid-on.

Chasing a competitive total on a dry Chepauk wicket that offered assistance for the spinners, the heat was on India who lost two wickets — Rohit Sharma (4) and KL Rahul (17) — inside the powerplay (45/2 in 5.2 overs). But Pant counter-punched his way to maiden T20I half-century and put on an 130-run stand with his Delhi state-mate Dhawan.

Halfway through the chase, India were 76 for two but the two southpaws dismantled the Windies bowling attack to add 63 runs in the next five overs.   As the ball gripped and turned, skipper Rohit justified his decision to go with three specialist spinners. And off-spinner Washington Sundar was introduced as early as in the second over.

Pooran’s blitzkrieg — 53 not out off 25 balls — caught India by surprise after having restricted the Windies to 67 for two in 10 overs. Shai Hope (24) and Shimron Hetmyer (26) gave the visitors a blistering start — 51 for no loss at the end of powerplay — but the introduction of Yuzvendra Chahal put the brakes on their run-rate.

Chahal struck off his first delivery by removing Hope. In a bid to slog-sweep, Hope top-edged the leg-spinner to Washington at mid-wicket. Chahal then removed danger man Hetmyer. An extravagant cut landed straight into the hands of Krunal Pandya at deep backward point.  Chahal and off-spinner Washington bowled in tandem as Windies could only add 16 runs to their powerplay total in the next four overs. Chahal’s figures of 4-0-28-2 stood out as Bhuvneshwar Kumar, Khaleel Ahmed and Krunal gave away almost 10 runs an over. Washington accounted for Denesh Ramdin (15).

Windies stepped on the accelerator with five overs to go. After hitting back-to-back sixes in Bhuvneshwar’s over, Pooran unleashed a switch hit against Chahal for a flat six over square-leg boundary. He then reverse-swept Bhuvneshwar. Khaleel, who gave away just one run in his first over, conceded 23 off the last over. The last five overs fetched the Windies 63 runs.