It’s been some days that the senior India cricketers started practising under NCA head and former skipper Rahul Dravid. 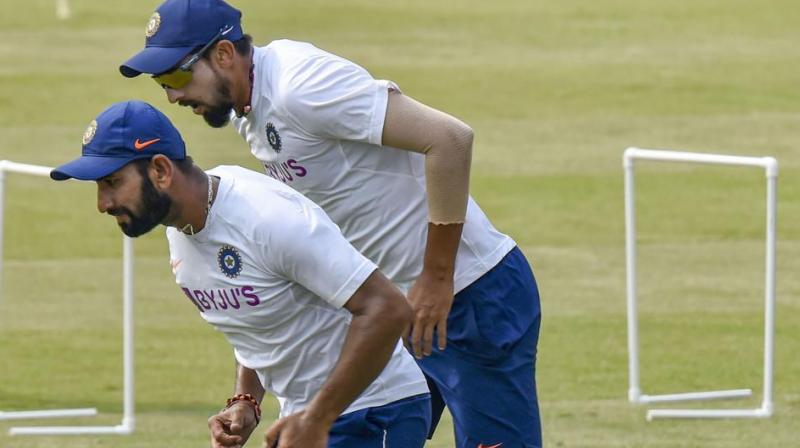 Indian Test specialists including Cheteshwar Punaja and Ishant Sharma have begun their practice for the upcoming Test series against Bangladesh. (Photo: PTI)

Bengaluru: Indian Test cricketers, including batting mainstay Cheteshwar Pujara and young gun Mayank Agarwal, have started practising with the pink balls at the M Chinnaswamy stadium here, beginning their preparations for the country’s first-ever day-night Test. India and Bangladesh will play their maiden Test under the lights at the Eden Gardens in Kolkata from November 22.

While short-format players are locked in Twenty20 series with Bangladesh, Pujara and vice-captain Ajinkya Rahane, all-rounders Ravindra Jadeja and Hanuma Vihari along with pacers Mohammed Shami and Ishant Sharma hit the National Cricket Academy (NCA) nets to get used to the challenge that pink balls will throw at them.

It’s been some days that the senior India cricketers started practising under NCA head and former skipper Rahul Dravid.

The early practice sessions will give Indians a fair idea of what they will encounter in the historic Test and is precisely the reason, all these players did not figure in the Mushtaq Ali Trophy matches for their respective states.

Sighting the ball in the twilight and handling reverse swing with the old ball under lights are the biggest challenges.

Skipper Virat Kohli is on a break and is yet to join his Test colleagues.

Broadcaster Star Sports ran a few clips of India’s practice session during the third and series-deciding Twenty20 between the two sides in Nagpur.