Keeper’s slot is most problematic

At that time, chief selector MSK Prasad had said that Pant was their first choice wicket-keeper across formats. 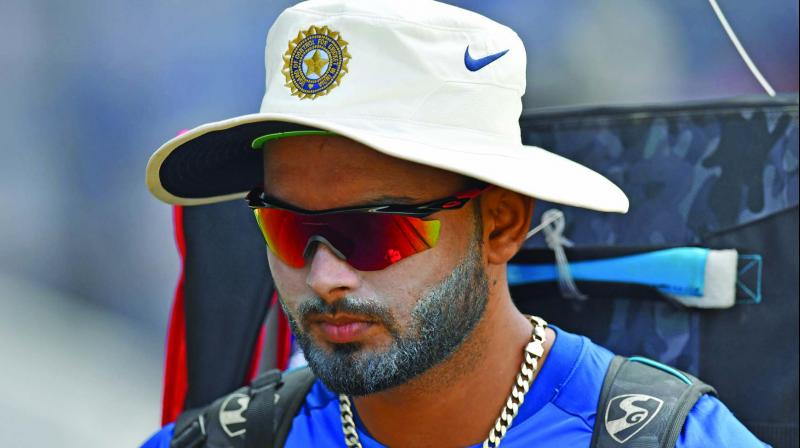 Mahendra Singh Dhoni has not played a single cricket match, not even worn his wicket-keeping gloves or held a bat since the World Cup finished in July, but his name’s swirling in cricket circles once again to be part of team for the T20 World Championship next October.

Rishabh Pant’s fumbling ways in the two T20s played so far against Bangladesh in this series has obviously been the major factor why Dhoni, who otherwise seemed was on the verge of retirement, has sprung back to attention.

Pant’s been error-prone which could compel the selectors to take a step back from their stated position at the start of this home season. At that time, chief selector MSK Prasad had said that Pant was their first choice wicket-keeper across formats.

Later, Prasad was to say that the selectors had ‘moved on’ from Dhoni.

The crux of this had to be how well Pant performs behind the wicket, not in front. But while he’s looked good with the bat (though more runs would have helped in the World Cup and in other internationals subsequently) Pant’s glovework has been a matter of growing concern.

He lost his place in the Test side to Wriddhiman Saha (though he is in contention as a batsman), and after shoddy work behind the stumps in the T20s against Bangladesh, has come under harsh scrutiny in limited overs cricket too.

The selectors had hedged their bets by including Kerala wicket-keeper batsman Sanju Samson also in the squad. At 24, he is only a couple of years older than Pant, but has had an up and down career after making a huge impact in the IPL which had earned him an India cap.

Samson seems to have sorted out his mind, become a more stable cricketer, and therefore also a more serious threat to Pant.

But he’s not the only challenger. As I’ve highlighted in past articles, other young wicket-keeper-batsmen too jostling for a place in the team.

Like Ishan Kishan and Srikar Bharath to name two. And KL Rahul can also step into this role. With so many young ’keeper-batsmen around, why and how does 38-year-old Dhoni come into the picture again one might ask.

The answer is that all others mentioned haven’t been exceptional in their glovework either, which leaves the team still vulnerable in limited overs cricket. While India are ranked 1 and 2 in Tests and ODIs respectively, the country trails in at lowly number 5 in T20.

While everybody agrees T20 cricket can be a lottery, rankings do reflect consistency. Or not. It is pertinent to remember here that India have not been able to replicate the sensational victory in the inaugural World Championship in 2007.

In fact, in recent times, they’ve fallen off considerably in this format. But to put the spotlight only on Pant for India’s recent struggles in T20s however, would be unfair. Keepers usually take a while longer for their skills to mature, and Pant is still only 22. He can only get better.

Moreover, other players not measuring up have contributed to the team’s travails. Frankly, apart from Rohit, Virat and Chahal on current form and Bumrah and Pandya (if fully fit), could be considered automatic selections in the squad.

This leaves 10 places — a very high proportion — still open. Fact is that the team appears disjointed. The balance and composition needed for consistent winning performances is missing, so the selectors have a task on hand.

Yet, the wicket-keeper’s slot is crucial and becoming most problematic for the team. More so, because Dhoni was not just a magnificent multi-tasking cricketer, but also the fulcrum of the side. His superb ability to ‘read’ the game, and offer the captain and other players astute advice was invaluable.

So, even while competition between Pant and other young ‘keepers hots up, Dhoni willy-nilly has come back into the equation!