Rohit Sharma's pep-talk got us motivated to win the match, says Shreyas Iyer

Deepak Chahar proved to be the main destructor as he scalped six wickets in the match. 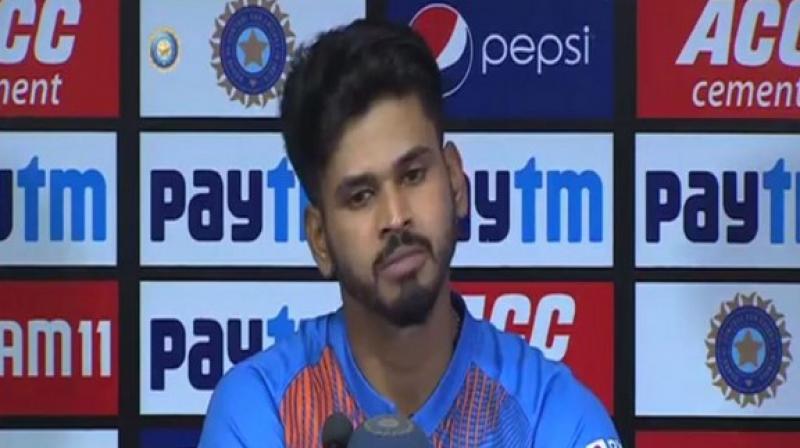 After registering a 30-run win over Bangladesh in the final T20I of the three-match series, India batsman Shreyas Iyer revealed that skipper Rohit Sharma gave a pep-talk to all team-mates and that proved as a motivation to win the match. (Photo:ANI)

Nagpur: After registering a 30-run win over Bangladesh in the final T20I of the three-match series, India batsman Shreyas Iyer revealed that skipper Rohit Sharma gave a pep-talk to all team-mates and that proved as a motivation to win the match.

Chasing 175 for the win, Bangladesh was bundled out for 144, giving the Men in Blue a win by 30 runs. Deepak Chahar proved to be the main destructor as he scalped six wickets in the match.

"Yeah, we were feeling the pressure. We know they are a good side and there is no team that you can underestimate in the shortest format. And in the previous two games we saw that they played a mesmerising brand of cricket," Iyer told reporters.

"We were going little lethargic at the start, but once they started going, Rohit recalled all players inside the circle, he gave us a pep talk and after that, all of us got determined to win the match," he added.

Earlier in the match, Shreyas Iyer and KL Rahul's knocks of 62 and 52, respectively enabled India to post a score of 174/5 in the allotted twenty overs.

Iyer said that he would like to give himself credit for playing the knock he did and changing the complexion of the game.

"Yes, I would say that. The over in which I hit three sixes changed the momentum of the match. Otherwise, we would have got 150 and that would have been a really tough total to difficult on this wicket. Yeah, I would give my self a credit. It was important for one of the top three batters to stay at the crease till the 15th over," Iyer said.

"There is a lot of competition going on in the side, but I personally feel, I compete with myself. When you say this position is empty in the batting order, I say to myself that I can bat any position and today's innings showed that I can play under pressure situations," he added.

Mohammad Naim played an 81-run knock to give Bangladesh a glimmer of hope in the match, but his dismissal at the hands of Shivam Dube ended the Bangla Tigers' hopes of going away with a victory.

Iyer revealed the two turning points in the match in his opinion. He lauded both Deepak Chahar and Dube.

"There were two turning points in the game. First, Deepak Chahar coming in and getting two wickets pretty quickly and second, Shivam Dube getting that two back to back wickets to change the match," Iyer said.

India and Bangladesh will now face each other in the two-match Test series and the first game will be played from November 14-18.