Ind vs Eng: Game plan was to attack the spinners, says Murali Vijay

The opener scored 136, his eight Test century to lay a solid foundation for the hosts against England’s first innings score of 400. 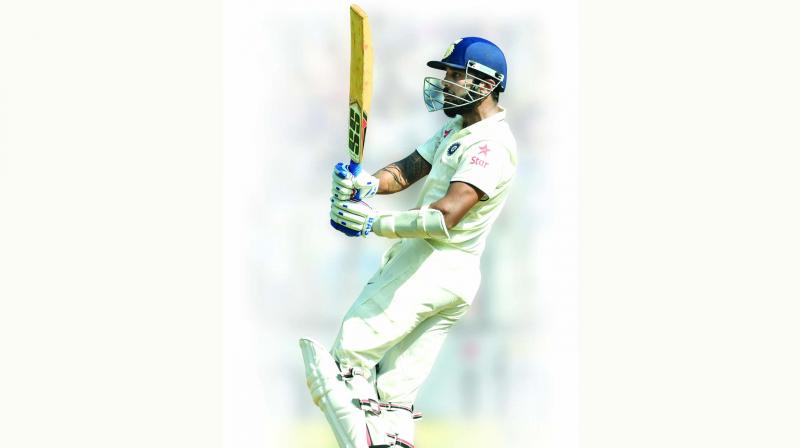 Mumbai: Murali Vijay was as crisp as his century while speaking after the third day of the fourth India-England Test here on Saturday.

The opener scored 136, his eight Test century to lay a solid foundation for the hosts against England’s first innings score of 400. India were 451/7 at close, ahead by 51 runs, and was Murali was aggressive in tackling the England spinners, saying “My game plan was to attack the spinners. “I didn’t want them to settle in one particular area where they could find it comfortable. So, I used my feet and the depth of the crease and played according to my game plan. It came out very well, I guess. “Their spinners bowled pretty well in patches. But myself and Virat played really well,” he added.

He said backing his instincts led to a turnaround in fortunes that saw a mid-series slump. “The hundred is very special because I started off well in the series (but) in a couple of matches could not play the way I wanted to. I was getting out too early. In this innings, I came out with a clearer mindset and just wanted to back my instinct and play.

“The break (after Mohali) allowed me to rethink and come back better. I was playing balls which I leave generally. There are a lot of other factors. But I won’t reveal them. But yes, the plan was to back my core game,” said Vijay.

The 32-year-old was all praise for his captain, a fellow centurion on the day, for his potentially decisive unconquered 147-run knock. He also said India’s top four comprising himself, K.L.Rahul, Cheteshwar Pujara and Kohli complimented each other’s game.

“One good thing is we, at least in the top four, understand each other’s game really well. We know exactly what to do in the middle. So, whatever the situation is, we stick to our game plan and work in pairs. “I will actually not comment on this (Kohli’s form) because he is improving every day. Currently, he is batting in his prime and which is great for us. I hope he can continue it for a longer period of time,” he added.

On the wicket, the opener said, “I think it is a very true wicket for the Test format because everybody had to work on their game plans and be very clear in their mind to deliver. The bowlers had to work their plans out. It has been a fantastic wicket.”

Vijay, who dedicated his century to his friend Srinath’s late father, who passed away on the opening day of the match, was also positive about India grabbing control of the match and pressing home the advantage.

“Any lead is gold on this wicket. During teatime, we thought; let’s get close to England’s total. But with the way Virat and Jayant Yadav are batting, we are in a pretty good position,” he added.