India's leading seamer is, however, baffled and failed to pinpoint whether it is the quality of white kookaburra to be blamed. 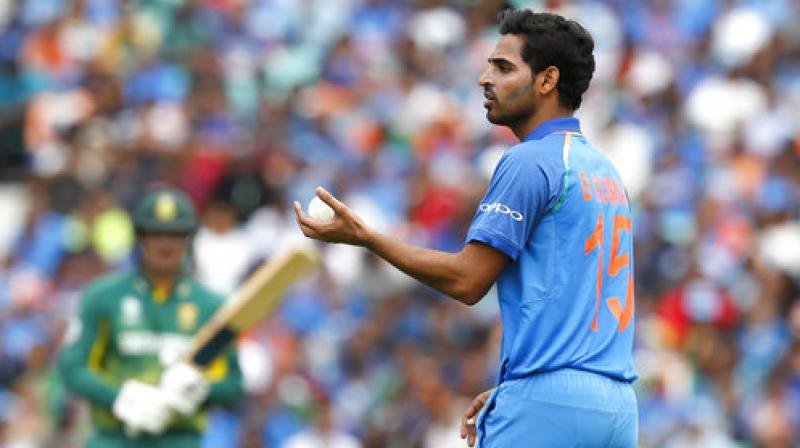 London: It is inexplicable when a white ball refuses to offer swing for seamers in English conditions and Bhuvneshwar Kumar has altered his strategy after failing to understand why this is happening during the ongoing ICC Champions Trophy here.

Bhuvneshwar has bowled 22.3 overs across three games taking four wickets for 100 runs at a very decent economy rate of 4.44, given the field restrictions in Powerplays are loaded heavily in favour of batsmen.

"It's very difficult to point out why the ball is not swinging in England. The wickets are not generally this hard in England during this time of the year. During the Champions Trophy in 2013 and the next year during Test series, wickets were soft.

"Not very soft that batsmen would encounter problems but soft enough for some deviation," Bhuvneshwar told mediapersons at the mixed zone after India reached the semi-finals.

India's leading seamer is, however, baffled and failed to pinpoint whether it is the quality of white kookaburra to be blamed. "I don't know whether that's the reason or something to do with the quality of the balls, but as everyone is watching that it's difficult for the bowlers to get swing."

Swing bowlers normally have to pitch it up in order to either move the ball away or into the batsman but Bhuvneshwar decided to hold the length back a little in order to stifle runs.

Something he successfully did against South African duo of Quinton de Kock and Hashim Amla during their 76-run opening stand. "When the ball doesn't swing then you have to alter the length. You have to bowl a bit back of the length.

Normally, we bowl fuller lengths to get wickets but here we are holding the length back.

"The par score is 300 and the main aim is to take wickets and if, then build up adequate pressure so that we can get wickets later to restrict them to a small total," Bhuvneshwar explained.

But doesn't a bowler feel helpless when there is nothing to look forward to and that too in England, a dream destination for bowlers. "In these circumstances, the idea is not to bowl at their strengths. Look, they will still find ways to score but idea was to keep it at bare minimum. I feel the pressure that we created in the first 15 overs helped us get wickets later on, not to forget the three brilliant run-outs," he added.

According to Bhuvneshwar, one of the main factors that worked during the South Africa match was the 40 runs that they saved in the second Powerplay, thereby increasing the pressure on the opponents.

"When (Quinton) De Kock and (Hashim) Amla were batting, we knew that their strategy was to not lose too many wickets till the 30th over, before going for the kill. But our plan was to ensure that we build pressure with dot balls. "The 40 runs that we saved during the second Powerplay helped. If you are only 130 at the end of 30th over, you are mentally under pressure."