Amir and Junaid took 2 wickets each in the space of 3.2 overs as Sri Lanka lost 4 wickets, including the well-set Mathews and Dickwella. 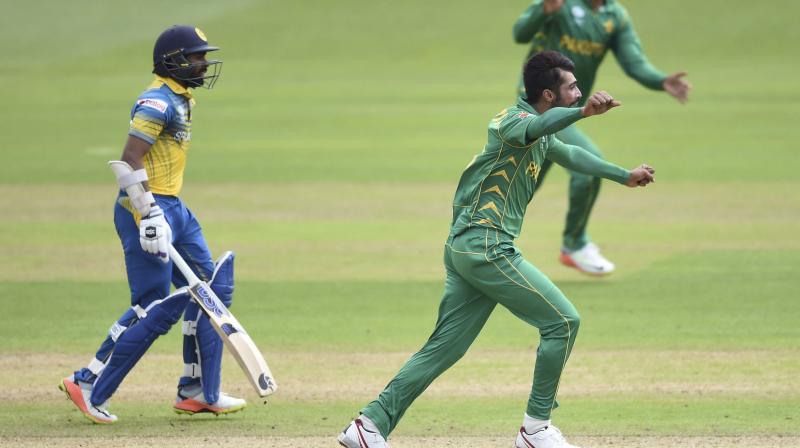 Cardiff: Fast bowlers Mohammed Amir and Junaid Khan combined to polish off the middle order, helping Pakistan bowl out Sri Lanka for 236 in a virtual quarterfinal of the ICC Champions Trophy, on Monday.

Sri Lanka looked set for a big score after being asked to bat in the final Group B match but Amir (2/53) and Junaid (3/40) scripted a turnaround with fiery spells.

Hasan Ali (3/43) was another Pakistani paceman who made an impact at the start of the innings.

Opener Niroshan Dickwella (73) and skipper Angelo Mathews (39) had put on a display of resolute batting before Amir scalped the latter to trigger the collapse at Sophia Gardens.

Amir and Junaid took two wickets each in the space of 3.2 overs as Sri Lanka lost four wickets, including the well-set Mathews and Dickwella, for six runs.

At the start, Danuhska Gunathilaka (13) was scalped early by Junaid but Dickwella and Kusal Mendis (27) stitched a 56-run stand to keep Sri Lanka going.

Things looked settled for the Island nation before Hasan Ali came up with a fiery spell, in which he troubled Mendis with pace and bounce before eventually bowling him out.

It brought Dinesh Chandimal to the crease but his stay was reduced to just two balls as the batsman dragged one from Fahim Ashraf onto his stumps, going for a drive.

Two wickets in three balls, however, did not bother Sri Lanka much as Dickwella remained solid at the other end and soon completed his half-century with a single off Mohammed Hafeez.

Skipper Mathews supported his colleague with a patient knock. The two batsmen rotated the strike quite easily, which not only kept the scoreboard ticking, but also put pressure back on Pakistan.

Frustration grew among Pakistan players with Mathews and Dickwella raising a resolute 78-run stand for the fourth wicket in 16.1 overs.

Amir was brought into the attack and he delivered with his second ball, getting rid of Mathews, who miscued a shot and dragged it onto his stumps.

It was the first wicket of the tournament for Amir and itcame at a crucial time for Pakistan. Junaid sent back new man Dhananjaya de Silva (1) and Amir returned to dismiss Dickwella, who fell to a sensational low catch by wicketkeeper Sarfraz Ahmed.

Junaid saw the back of Thisara Perera to rattle the Lankan innings.