ICC CWC'19: 'Dhawan is expected to be fit so we haven't asked for replacement': BCCI

Dhawan will miss the game against New Zealand on Thursday and the marquee clash against Pakistan on Sunday. 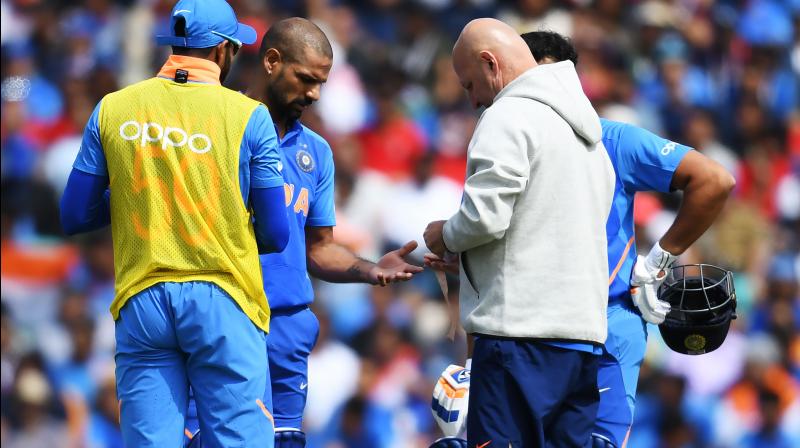 While it is blow to the team ahead of India's third game against New Zealand, the good news is there is a chance that he will recover and therefore, the team management has not sought for any replacement. (Photo:AFP)

Nottingham: In-form senior India opener Shikhar Dhawan was on Tuesday ruled out of at least three World Cup matches after sustaining a hairline fracture on his left hand.

While it is blow to the team ahead of India's third game against New Zealand, the good news is there is a chance that he will recover and therefore, the team management has not sought for any replacement.

"Team India opening batsman Shikhar Dhawan is presently under the observation of the BCCI medical team. The team management has decided that Dhawan will continue to be in England and his progress will be monitored," Indian team media manager Moulin Parikh posted on official Whats App group.

While earlier it was learnt that Dhwan had suffered a thumb fracture, it has been clarified that the injury is on the back of his left hand.

"Dhawan sustained an injury on the back of his left hand in the region between the index finger and thumb during the CWC 2019 league match against Australia," the media manager further stated.

The left-hander along with physio Patrick Farhart, went to Leeds for consultation with specialists earlier on Tuesday.

Dhawan will miss the game against New Zealand on Thursday and the marquee clash against Pakistan on Sunday. It remains to be seen if he regains fitness for the match against Afghanistan of June 22 but the team is expecting that he will be fully fit by the business end of the tournament.

"As of now, no replacement is being sought. The team management believes that Shikhar is a match winner and should be given every chance to get fit. In fact, his treatment and recovery can happen faster here and team expects him to be back in action," a senior BCCI official, currently in UK, told PTI on conditions of anonymity.

It is learnt that at no point of time any replacement was sought. Even though the names of Rishabh Pant and Shreyas Iyer were doing the rounds, the senior official said that they were mere speculations.

"The team management never asked for replacements. I don't know from where the news of Rishabh Pant joining the squad was making rounds. It was speculation by the media," the official added.

Since India play Afghanistan on June 22 in Southampton, which is six days after the Pakistan game in Manchester on June 16, Dhawan will get at least 11 days to recover.

Even if Dhawan misses the Afghanistan game, the next match against West Indies in Manchester, which is on June 27, gives him another six days to recover.

The team management is thinking about taking a chance that will allow him to recover for the last three league games (against England on June 30, against Bangladesh on July 2 and Sri Lanka on July 6) before gearing for a semi-final, where India are almost certain to feature.

Dhawan was the hero of India's win over Australia on Sunday with a knock of 117 off 109 balls.

His injury-forced absence would be a massive blow for India given his stupendous record in ICC events.

He batted through pain after being hit on his left thumb by a rising delivery from pacer Pat Cummins on Sunday but didn't field during the clash.

Ravindra Jadeja stood in his place for the entire 50 overs.

Dhawan underwent scans here, in which the fracture came to light.

"Shikhar has shown that his threshold for pain is very high. If he says he can recover, I would wait for him," said former India captain Sunil Gavaskar.

It has been learnt that the team management is not too keen on a replacement right now unless the doctors rule him out for more than a month. The Indian team has KL Rahul, a specialist opener who can join Rohit Sharma at the top of the order.

In that case, one among Vijay Shankar or Dinesh Karthik will come in the middle-order for the next two games.

The ICC doesn't have any specific stand-by list as such and anyone could replace a current player based on approval from the event technical committee.