Pant is expected to join the World Cup squad ahead of India’s World Cup match against New Zealand. 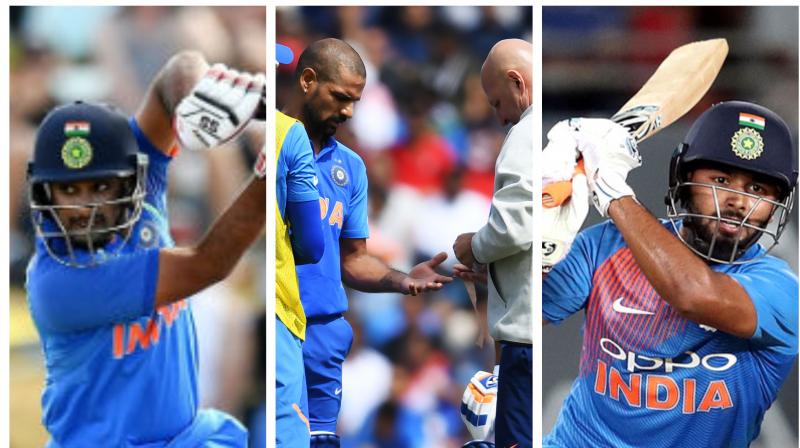 Rishabh Pant’s entry to the World Cup squad made cricket experts and pundits engage themselves in a debate, asking who should replace the injured opener. (Photo:AFP)

However, Pant’s entry to the World Cup squad made cricket experts and pundits  engage themselves in a debate, asking who should replace the injured opener. Former cricketer Sunil Gavaskar and Kevin Pietersen immediately spurted out Pant’s name, while former Indian opener Gautam Gambhir suggested that Ambati Rayudu should get the chance to replace the ‘centurion’ of the last match.

After Dhawana’s injury, the cricket legends also announced the likes of Shreyas Iyer too. Along with KP, the Indian fans took to twitter and advised the Indian selectors to include Rishab Pant.

The fans filled the social media site with loads of memes, suggesting the selectors to call up Rishabh Pant blindly. Here are some of the memes:

Shikhar Dhawan is out for 3 weeks due to thumb injury. #ShikharDhawan
Meanwhile Rishabh Pant. pic.twitter.com/mdMBTAgKVP

Rishabh Pant, Ambati Rayudu, Manish Pandey & Prithvi Shaw outside the BCCI Headquarters after #ShikharDhawan is ruled out from the world cup due to thumb injury.#CWC19 #WorldCup2019 @DennisCricket_ pic.twitter.com/hlhCS9qjjr

Rishabh Pant, Ambati Rayudu, Manish Pandey & Prithvi Shaw outside the BCCI Headquarters after #ShikharDhawan is ruled out from the world cup due to thumb injury.#CWC19 #WorldCup2019 @DennisCricket_ pic.twitter.com/hlhCS9qjjr

Coming back to the match terms – When India play their third match against the New Zealand on Thursday, India’s main headache will be who should open the innings with Rohit Sharma. KL Rahul can be one probable option. KL has already opened the innings for Kings XI Punjab during the 2019 IPL season.

And, if Pant is included in the squad then should the team management make him bat in the middle order or be a reserve middle-order batsman as Vijay Shankar and Dinesh Karthik are more likely to get a chance ahead of Pant.

Statistics say that Pant doesn’t hold a good record in ODIs. In all the 5 ODIs that Pant played, the 21-year-old has managed to notch up only 93 runs at an average of 23.25.

This is why Pant is favoured so much in ODIs. However, the Delhi Capitals opener was in touch in the 2019 IPL season. Pant amassed 488 runs in 16 matches including three 50s.