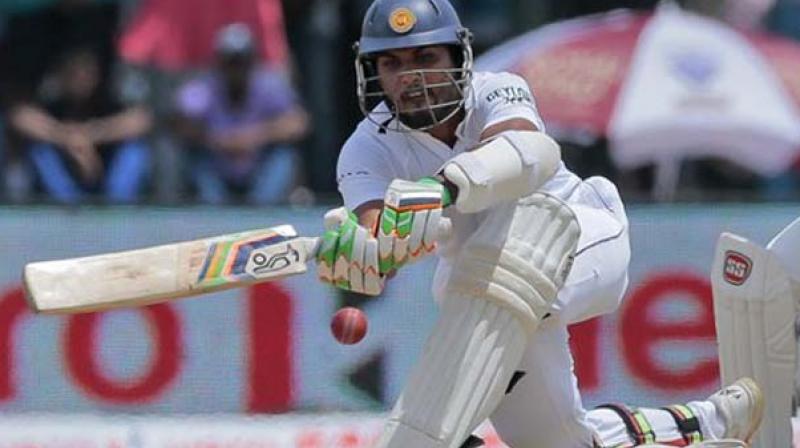 Their first challenge starts Friday, when Chandimal will lead the side in Colombo for the one-off Test against Zimbabwe. (Photo: AP)

Dinesh Chandimal will lead the Test side while Upul Tharanga will captain in limited-overs matches, Sri Lanka Cricket (SLC) said.

The reshuffle caps a turbulent period for the beleaguered Sri Lankan side, whose loss to Zimbabwe followed a fitness and coaching crisis and an early departure from the Champions Trophy.

"Mathews tendered his resignation a short while ago this morning," said SLC chief Thilanga Sumathipala said.

"We want to regroup and restructure and move forward."Mathews said he took the blame for Sri Lanka's recent woes, and was making room so his successor could prepare the side for the World Cup in 2019.

"There were times when I wanted to step down, but I did not want to let the team down at that time because there were no replacements as such," he told reporters.

"But I feel this is the right time. The team's interests supercede my interests. My honest opinion is that there are candidates who can take over the reins."

Mathews bore the brunt of the criticism levelled at Sri Lanka's cricketers in the aftermath of their 3-2 series loss at home to minnows Zimbabwe on Monday.

Mathews described the shock defeat as lowest point in his career and a "hard pill to swallow".

The struggling side entered the series without a coach after Graham Ford's sudden exit following their poor showing in the Champions Trophy last month.

Sri Lanka's sports minister delivered the squad an ultimatum after that performance, ordering players get in shape or face the boot after declaring them unfit to compete on the world stage.

Sri Lanka Cricket manager Asanka Gurusinghe said the team had hit rock bottom but would bounce back."After losing to Zimbabwe, we have to go up. This side is too good to keep going down," Gurusinghe said.

Their first challenge starts Friday, when Chandimal will lead the side in Colombo for the one-off Test against Zimbabwe."I am going to put my heart and soul into the team," Chandimal said.

Tharanga, who will take over in Twenty20s and ODIs, said there was much room for improvement following the embarrassment against Zimbabwe. "As a team we did not perform well," he said.

The team remains plagued by fitness problems, with up to 20 players battling injuries in the past year, said chief selector Sanath Jayasuriya. Mathews had to return home halfway through Sri Lanka's tour of South Africa earlier this year and missed Bangladesh's tour of Sri Lanka due to a hamstring injury.