India find themselves in deep trouble

A one-man show can work once in a while, but is unsustainable over a period of time for a team that aspires to be the best in the world. 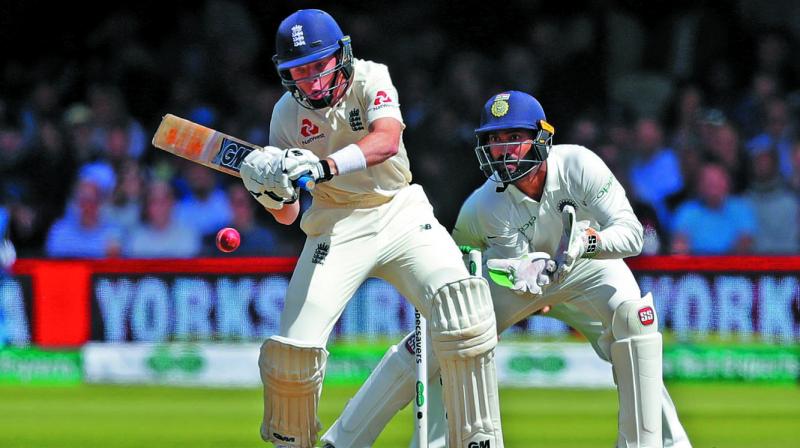 England’s Ollie Pope in action during day three of the second test at Lord’s in London. (Photo: AP)

For a while on Friday after the unfortunate Cheteshwar Pujara was run out — stranded badly by Virat Kohli — and India were reduced to 15-3, I feared we were in for a repeat of Lord’s 1974. Or worse.

Cricket followers of my vintage are unlikely to forget what happened in the aforementioned match. Set to score 328 to win, India were bowled out for a paltry 42, Geoff Arnold and Chris Old exploiting the overcast conditions splendidly to destroy a fairly strong batting line-up.

Kohli and Ajinkya Rahane, avoided this ignominy on Friday, huffing and puffing for survival, and Ravi Ashwin’s pluck then helped India past the 100 mark. But India find themselves in deep trouble even though the Test is effectively of four days, what with the first being washed out.

True, losing the toss was a big blow in bowler-helpful conditions.

Yet ill-luck with the coin cannot condone thoroughly inept batting. Rejigging the order, getting in Pujara for Dhawan has made no difference. The batting has looked as vulnerable as at Edgbaston.

As I write this, three days still remain in this Test. Unless England collapse in similar fashion, or the weather lops off substantial playing time, India could be hard-pressed to save the Test, which might effectively seal the fate of the series.

Clearly India’s current woes are linked to the failure of the main batsmen. In three innings yet, only one - Kohli — has gone past 50. In fact, he made a century and a half century in the first Test, which only accentuates the problem.

Kohli has scored 509 runs in 9 innings.  The best after him are all-rounders Pandya (183) and Ashwin (142). Seventeen other players, including top order batsmen, have made a meagre 1155 runs in 90 innings at just 12.38 runs per innings! This dismally lop-sided performance shows why India are floundering.

While the series in South Africa was fiercely contested - as reflected in the 1-2 result — and the first Test of this tour was a humdinger, India’s collapse in the first innings at Lord’s shows regression rather than progress where the batting is concerned.

Of course, batting in English conditions remains the biggest challenge for batsmen from all over the world, not just Indians. Late swing in the air and sharp seam movement off the pitch test the mettle of the best.

But it is success against this hardship throws up the true-blue great batsman, as distinct from fair-weather, featherbed maestros. Natural ability alone can help up to a point, practicing with bowling machines up to a point further.

No machine can predict the extent of swing a high quality bowler will get. The greater need is of technical certitude acquired through constant learning, and more particularly a doughty temperament and good old-fashioned grit, to go with the talent.

Kohli’s success in South Africa, and especially on this tour as yet, highlights this. On his previous visit to England in 2014, he was an abject failure. At Edgbaston, he showed why he is the best batsman in the world today.

But behind Kohli’s transformation is four years spent climbing a steep learning curve. He examined and assessed his own shortcomings, worked hard to overcome them with assiduous practice/training, all stemming from a burning ambition for excellence.

Yes, Kohli is an exceptional cricketer, but there is something to be learned from him by the other Indian batsmen. In turn, as captain, Kohli has the responsibility to apply both his analytical mind as well as man-management skills to help the struggling batsmen to actualize their potential.

A one-man show can work once in a while, but is unsustainable over a period of time for a team that aspires to be the best in the world.

This is what India had set out to do on this tour: make their no.1 Test ranking more meaningful.

Barely into the second Test, the team finds itself on a slippery slope. Results of the tours in 2011 (0-4) and 2014 (1-3) show how sharp this incline can be unless the determination to fight back is strong.

Coming out unscathed from Lord’s could be a signal in that direction.