Kumar scalped four wickets in the match and he got the crucial breakthroughs of Chris Gayle, Nicholas Pooran, Roston Chase and Kemar Roach. 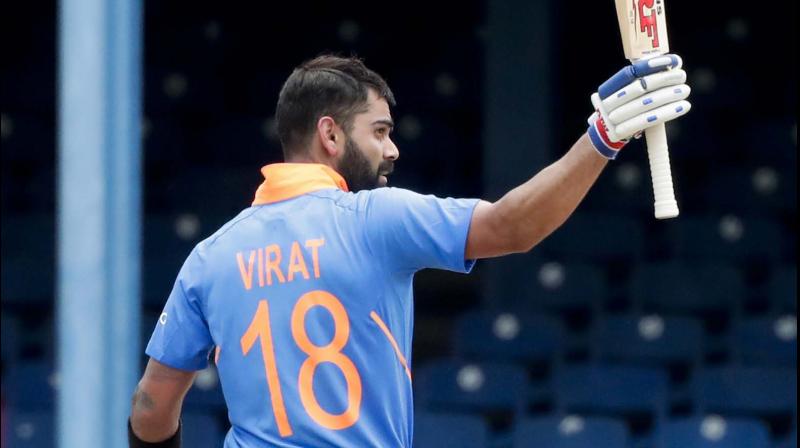 Port of Spain: After registering a comfortable 59-run win over West Indies owing to Duckworth-Lewis in the second ODI of the three-match series, Indian pacer Bhuvneshwar Kumar lauded skipper Virat Kohli, saying the captain badly wanted to score a century.

"From Virat's expression, you can make out that how badly wanted a hundred. It's not like he was out of form, it was just that he was getting dismissed in the 70s or 80s in the World Cup. The wicket was not easy, when he came back after getting dismissed, he said the wicket is not that easy," Kumar told reporters after the second ODI.

Kumar scalped four wickets in the match and he got the crucial breakthroughs of Chris Gayle, Nicholas Pooran, Roston Chase and Kemar Roach.

Windies were 179/4, when skipper Kohli brought Kumar back into the attack and the bowler did not disappoint as he sent both Pooran and Chase back to the pavilion in quick succession.

Kumar said that he planned on bowling just economically and on bowling dot balls to create more pressure.

"I was not thinking about the result. We knew if we get one-two wickets, we will be back in the game. I just planned on bowling economically and bowling more dot balls," Kumar said.

The second ODI of the three-match series was the 300th ODI for Windies opener Chris Gayle. Kumar opined that this landmark is a great achievement by the flamboyant Windies batsman.

After winning the toss and opting to bat first, India had managed to score 279/7 in the allotted fifty overs. The partnership of 125 runs between Kohli and Shreyas Iyer was the main reason that India went past the 270-run mark.

Kohli played a knock of 120 runs whereas Iyer went on to make 71 runs. Kumar lauded the partnership between the duo and he also complimented Iyer on the maturity he displayed during his innings.

Kumar also said that the team would look to win the series by winning the final ODI of the series.

"Shreyas and Virat had a crucial partnership. The wicket was not that easy and Shreyas played with maturity and later on he was scoring boundaries as well," Kumar said.

"We are 1-0 up in the series and we want to win the series. Whenever you play outside India, winning a series is a huge boost and we will try to put our best foot forward in the final ODI," he added.

India and West Indies lock horns in the final ODI of the three-match series on Wednesday, August 14 in Trinidad and Tobago.