Kohli became the second-highest run-getter for India in ODIs as he played a knock of 120 runs against Windies in the second ODI on Sunday. 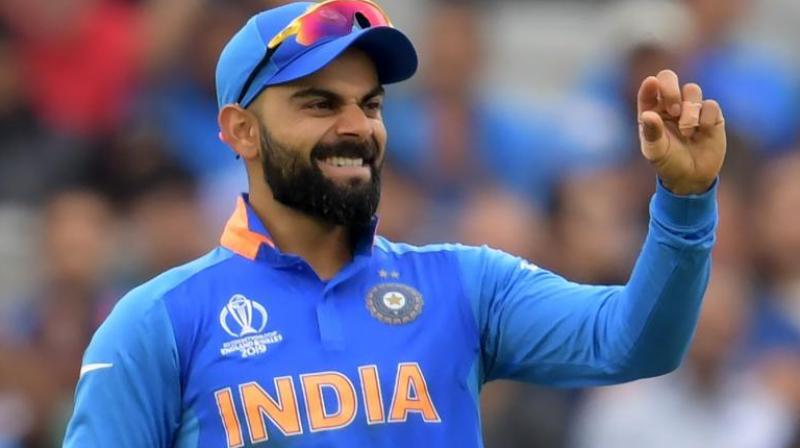 When asked about the tough weather conditions, Kohli said that he prepares and trains to contribute for such difficult days. (Photo: AFP)

Kohli became the second-highest run-getter for India in ODIs as he played a knock of 120 runs against Windies in the second ODI on Sunday.

Chahal also took a jibe at Kohli saying the biggest motivation for the Indian skipper to score a century is that it would give him a chance to appear on ChahalTV. Kohli also highlighted the significance of his the knock after openers Dhawan and Rohit departed early.

“It was important for one of the top three to score big which has always been our target. Shikhar and Rohit have done that consistently for us and I have contributed whenever I have got an opportunity. Since both of them failed to get going it was important for me stay and play a big knock. To be honest I was drained after reaching the 60s, but I had to stick around for the team. I think it was challenging because the weather was very humid,” Kohli said.

From @imVkohli's record 42 ton to his dance moves 🕺🕺, @yuzi_chahal makes a smashing debut in the Caribbean. By @28anand #TeamIndia #WIvIND

When asked about the tough weather conditions, Kohli said that he prepares and trains to contribute for such difficult days.

“My mindset has always been to work hard for the team. Be it a crucial catch or a run out, I want to do it for the team. I think if you aren’t giving your 100 percent on the field then you are not doing justice to your place. I keep my lifestyle, training, diet and recovery in a way that I can contribute to the team’s cause.”

Chahal finally brought up the topic of Kohli’s dance moves during the first ODI and the skipper gave a hilarious response.

“I am enjoying myself on the field. Even if I am a captain I don’t believe in acting in a certain way. God has given me such a great life and opportunity to represent my team. I believe in enjoying the moment. I am in a good space in my life and that is why I shake a leg whenever there is music.

“Bhangra has always been special but if there is groovy music then the moves naturally because intentions are always good,” Kohli signed off.