Bhuvneshwar scalped four wickets for 31 runs in India's 59-run win over the Caribbeans. 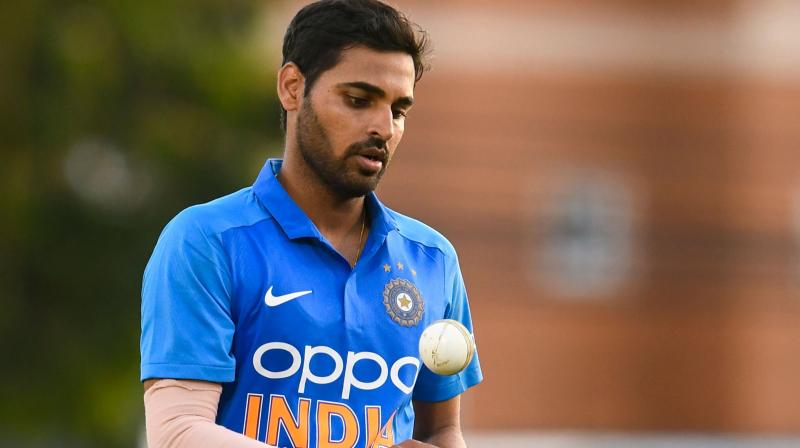 West Indies lost wickets at regular intervals but looked well within sight of the target with Nicholas Pooran (42) and Rostan Chase (18) in the middle. (Photo: AFP)

Port-of-Spain: India pacer Bhuvneshwar Kumar said dot balls, and not wickets, were on his mind in the second ODI against the West Indies as he believes that an economical spell never goes unrewarded.

Bhuvneshwar scalped four wickets for 31 runs in India's 59-run win over the Caribbeans, which gave the tourists a 1-0 lead in the three-match series after a washed out lung-opener.

"When I came to bowl I was just thinking I have to bowl economically, get more dot balls. I feel getting wickets is a byproduct of bowling tightly. I wasn't thinking much about the result because we knew if we get one or two wickets we will be back in the game," Bhuvneshwar said of the rain-curtailed match.

Earlier, India skipper Virat Kohli laid the foundation of the triumph with his 42nd ODI hundred. Kohli ended his 11-innings century drought with a 120-run knock off 125 balls to help India to 279 for 7. Shreyas Iyer also chipped in with a fine knock of 71.

"From Virat's expression you could see that he badly wanted to score a hundred not because he was out form but because he was getting out in the 70s and 80s and he's always known for scoring big runs," Bhuvneshwar said at the post match conference.

Kohli's last hundred was against Australia in March. Since then the Indian skipper was among the runs, notching up five half centuries in the World Cup, but failed to reach a ton.

"The wicket wasn't easy, when Virat came back to the dressing room he said after the ball gets old it's not easy to score runs," Bhuvneshwar added.

West Indies lost wickets at regular intervals but looked well within sight of the target with Nicholas Pooran (42) and Rostan Chase (18) in the middle.

However, Bhuvneshwar changed the complexion of the game in just one over.

In the 35th over, he first dismissed Pooran and then leapt to pull off a stunning catch to send Chase back.

"I just caught it. I wasn't expecting it. Pooran's wicket was the main wicket for us because we all know how he plays and he can change the game. So his wicket was the key for us," he said of the fine catch.

"Roston Chase also the moment he came he started taking singles. So those two wickets were crucial for us."

Now the Indian pace spearhead has set his sights on a precious away series win. India lead the three-match ODI series 1-0.