'When you think about team, you end up batting more': Virat Kohli

The batsman managed to score his highest Test score as he registered an unbeaten knock of 254 runs. 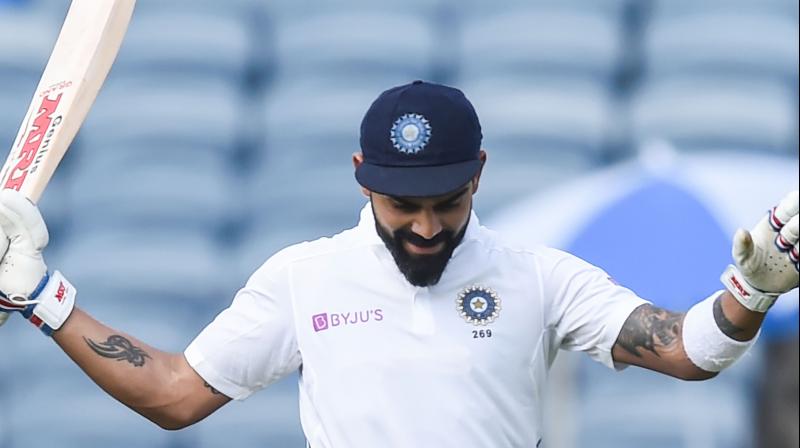 The skipper declared the innings despite having a chance of scoring a triple-hundred. (Photo: AFP)

Pune: After becoming the Indian batsman with the most number of double centuries in Tests, skipper Virat Kohli said that after becoming the captain, he started to think about the team completely.

The batsman managed to score his highest Test score as he registered an unbeaten knock of 254 runs. The skipper declared the innings despite having a chance of scoring a triple-hundred.

In a video posted by the Board of Control for Cricket in India, Kohli said: "Feels great obviously. It's a nice little thing to become the Indian batsman with the most number of double centuries in Tests. I used to struggle initially to get big scores, but as soon as I became the captain, I started to think about the team. And when it happens you end up batting more than you can imagine".

Happy to get a daddy hundred: @imVkohli tells @RajalArora

The Indian captain spoke about his epic double century & picked his top two Test double hundreds in his career so far.

What makes this feat special is that the batsman has scored all his double centuries after 2016. Kohli said that his knocks against West Indies and England are his top two scores of over 200 in Test cricket.

"Overall, I am very happy. It was a very dominating day for us again. We are in a top position. If you keep thinking about the team, you just do whatever is best. All double centuries are great, but if you ask me, my top two double hundreds would be against West Indies in Antigua and against England in Mumbai," Kohli said.

The 30-year-old was involved in a 225-run partnership with all-rounder Ravindra Jadeja. This stand enabled India to post 600 runs on the board.

India also managed to take three wickets of South Africa before the close of play on day two of the match and the Proteas ended the day at 36/3.

"The plan was simple, we wanted to score 600 as soon as possible. Jaddu also batted brilliantly. He played with a great tempo, and it allowed me to bat in a normal manner. I did not have to take many risks and the partnership flourished between me and Jaddu. We got three wickets by the end of the day as well, so it was a very satisfying day. We wanted to attack and be positive," Kohli said.

With this innings, the batsman also went past the 7,000-run mark in the longest format of the game.

In the match, the 30-year-old Kohli also surpassed former Australia batsman Don Bradman to record the most number of 150 plus scores as a captain.

Kohli now has 9 scores of 150 plus while captaining India, whereas Bradman had 8 scores of more than 150.

Australia's Michael Clarke, Sri Lanka's Mahela Jayawardene, West Indies' Brian Lara, and South Africa's Graeme Smith are next on the list with 7 scores of 150+ each.

The 30-year-old, who is leading his side in the 50th Test match also joined New Zealand's Stephen Fleming, England's Alastair Cook, and Australia's Steve Waugh to become only the fourth captain to score a century in his 50th match as captain.

Kohli now also has most runs as an Indian captain. He went past former cricketer Sunil Gavaskar.

He also became the first Indian to score 40 hundreds as skipper.