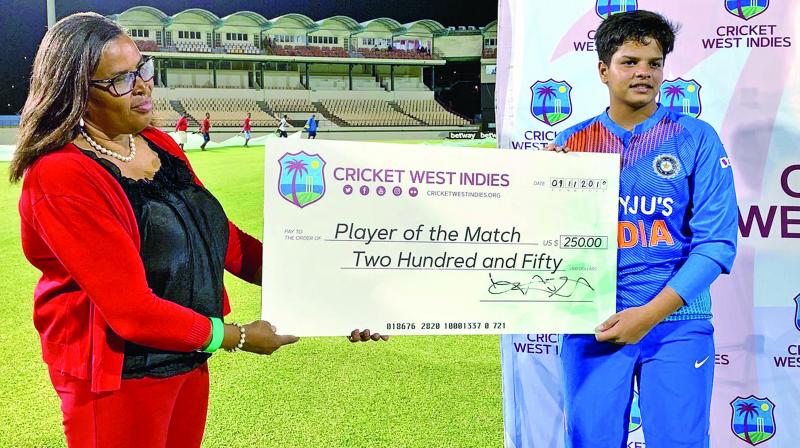 It is not often that a 15-year old is thrown at the deep end of a pool. The selectors that picked the Indian Women’s cricket team introduced a raw player who was oozing talent. In September 2019, Shafali Varma was selected to play a Twenty20 (T20) series against South Africa at Surat. The young girl did not set the Tapti River on fire coming back with a duck in her first outing but, thankfully, she was persisted with (for the teams tour of West Indies) and her last two innings of 73 and 69 not out have made the pandits sit up and take notice.

With her maiden half century in a winning cause at Gros Islet she became the youngest Indian international to score a fifty breaking Sachin Tendulkar’s record which stood for thirty years and that of Rohit Sharma who had scored a T20 half century at the age of 20 years. Shafali who opens the innings has now comfortably got into the slot left vacant by Mithali Raj who retired from playing the T20 format in September this year.

The current Indian women’s team looks well balanced with Shafali and Jemima Rodrigues under the care of Harmanpreet Kaur, Smriti Mandhana and the erudite WV Raman, the coach.

These young players need to be nurtured and well looked after as fame and the media glare can disrupt careers, as we have seen with a few budding talents in the past. While the Indian Women clinched the T20 series against the West Indies, it was heartening to see the Men win their series against Bangladesh in the shortest format of the game. Two names that stood out in the recently concluded matches were of Deepak Chahar and Shivam Dube. Chahar would never have imagined that he would finish the day with 6 wickets for a mere 7 runs to put water on the plans of the Bangladesh team to win their first T20 series in India.

With Bhuvneshwar Kumar and Jaspirt Bumrah out nursing injuries, the Rajasthan lad did not make Indian fans miss these T20 stars but reinforced the fact that India has a very healthy back up plan. Chahar, like Bhuvneshwar relies on swing and variations to deceive batsmen and his stint with the Chennai Super Kings in the Indian Premier League has helped him get the confidence much needed for achieving success in international cricket.

Shivam Dube, who hit the news when he carted five sixes off five balls in a Ranji Trophy fixture for Mumbai against Baroda last year, soon came into the radar of the IPL talent scouts.

While he had a decent season with Royal Challengers Bangalore, his performances for India A in their series against South Africa A got him an opportunity to play international cricket. The six-footer who is a competent seamer, played the perfect foil for India at Nagpur and ended up with 3 wickets for 30 runs.

Both Dube and Chahar are good batsmen who can contribute cameos to the team’s cause. With Hardik Pandya out with an injury and Vijay Shankar missing from the International scene, Dube is the man MSK Prasad and his team of selectors went to and they were certainly not disappointed.

With the World T20 slotted a year from now in Australia, the preparation of the Indian team looks to be on the right track. With the top batting order almost in place, the competition for the seamers and all-rounders slots will make it very interesting. Chahar and Dube have added depth with their super performances and will cause the selectors a happy problem when they do sit to pick the final squad.

India now play two T20 series against West Indies and Zimbabwe at home and though the Windies are not in the best of form in the longer formats, they can be a dangerous team in the T20 version.

From now on, the Indian squad will need to be focused on the ultimate objective of winning the ICCT20 Cup and mentoring young talent will be the key in India’s success.

BCCI President, Sourav Ganguly’s comment that Coach Ravi Shastri will have to start winning big games will be back on the mind of the former Indian all-rounder. With so many youngsters like Chahar, Dubey and Sanju Samson in the mix, Shastri and skipper Virat Kohli will need to wear the mentors’ hat if India are to start winning big matches and tournaments.