Dhoni, along with his wife Sakshi, came at the polling station to exercise his right to vote. 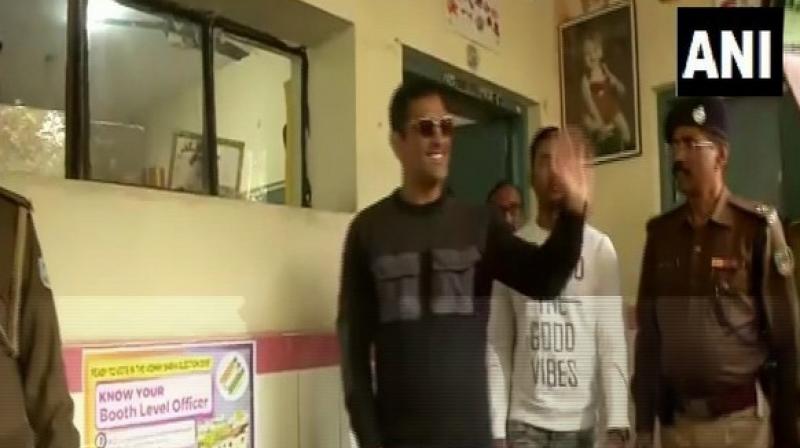 Dhoni, along with his wife Sakshi, came at the polling station to exercise his right to vote. The cricketer was dressed casually in a grey sweatshirt and blue jeans along with a standout pair of sunglasses.

Today is the third phase of the five-phased Assembly elections in Jharkhand. A voter turnout of 45.14 per cent was recorded till 1 pm, according to the Election Commission of India (ECI).

While the highest polling has taken place in the Ichagarh Assembly constituency with 56.01 per cent voters casting their votes, the lowest polling has been recorded on the Ranchi seat with just 30.61 per cent votes being polled till 3 pm.
The third phase of polling will decide the fate of legislators in 17 seats out of the total 81 constituencies.

A total of 309 candidates, including 32 women, are contesting from 17 assembly seats. The constituencies, including two reserved for SC candidates and one ST candidate, in which voting is being held are spread over eight districts in the state.

The assembly elections in Jharkhand became a multi-cornered fight with the All Jharkhand Students Union (AJSU) breaking off from BJP to fight the elections on its own and other regional parties such as JVM among others already in the competition.

Congress, Rashtriya Janata Dal (RJD) and the Jharkhand Mukti Morcha (JMM) have entered into a coalition to defeat BJP, which is seeking to return to power under the incumbent Chief Minister Raghubar Das.

The first phase of the election in the state took place on November 30 while the second round was held on December 7.

On the work front, the 38-year-old Dhoni is currently enjoying some time away from the game and he last played competitive cricket during the World Cup.

He had to endure criticism for his slow batting approach during India's matches in the tournament. Especially in the games against England and New Zealand (semi-final), he had to bear the brunt of netizens who deemed him as the reason for the Men in Blue's loss.