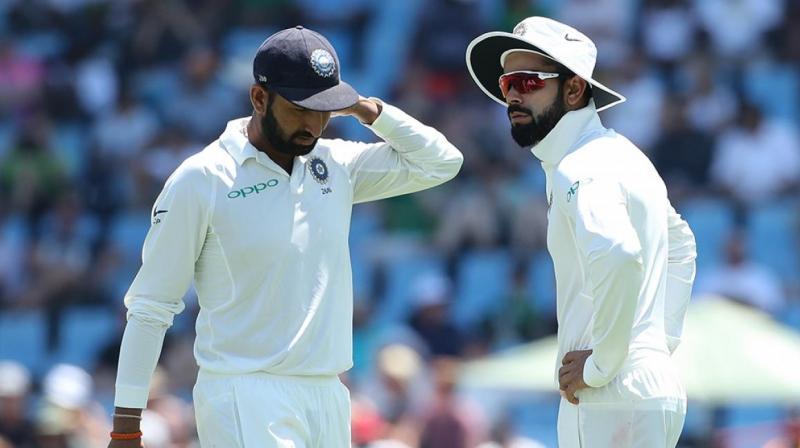 Virat Kohli-led Team India will hope to bounce back from their 72-run defeat against South Africa. (Photo: BCCI)

Centurion: India scripted an incredible comeback as South Africa finished Day 1 of the 2nd Test at Centurion with 269 runs on the board at the cost of 6 wickets.

After South Africa posted a solid 78-run partnership heading into lunch with 10 wickets in hand, Ravichandran Ashwin delivered the first wicket for India by dismissing Dean Elgar. But it did not have any effect as Hashim Amla and Aiden Markram continued to bolster the South African innings with a 63-run stand.

Ashwin once again struck for India, claiming the 2nd wicket by getting rid of Aiden Markram in the nineties. Hashim Amla and AB de Villiers later resumed the innings steadily to leave the hosts for 182-2 at tea.

As du Plessis' men continued to push India on the back foot, the visitors bounced back with by dismissing AB de Villiers cheaply. South Africa continued to steer the innings through Amla and du Plessis, but just as the hosts looked set for another big partnership, India shifted the momentum in their favour with 3 quick wickets.

Amla and Philander were involved in a horrible mess up, that saw both of them being run-out while Quinton de Kock fell victim to Ashwin without opening his account.

With less bounce and seam movement on the pitch, the Indian batting order must be excited when they take the field on Day 2. But with du Plessis still at the crease, the Indian bowlers need to start the day sharply with wickets as soon as possible.

WICKET! What's going on? Nothing's working out for South Africa and India are in a merry. Two run-outs in two overs. The dismissal is same as that of Amla.  Philander gently nicks the ball and keeps running towards the non-striker's despite a big no from du Plessis. Pandya rushes towards the stumps and calmly whips off the bails.

WICKET | Complete chaos out there. Misunderstanding between du Plessis and Philander (0) causing a run out for the latter. Key wicket for India. SA 251/6 #SAvIND #FreedomSeries pic.twitter.com/fC1cM2at7L

WICKET! Quinton de Kock departs for a duck. Ashwin bowls a good length delivery outside off, and de Kock, who is flat footed edges the ball to Kohli at first slip. Credit to Virat Kohli for also refusing the new ball.

WICKET | Ashwin gets his 3rd wicket and its De Kock who is gone without scoring a single run, caught in the slips. SA 250/5 #SAvIND #FreedomSeries pic.twitter.com/KnsXQKq5hs

WICKET! India get their man and Hashim Amla is run-out, courtesy of a Hardik Pandya brilliance. Amla nicks a short one and du Plessis calls for the run. Hardik swiftly runs towards silly point collecting the ball and making a throw towards the non-striker's end before hitting the bulls eye! Amla's tired legs deny him another century.

WICKET! And a lucky one for India. AB de Villiers chases a wide ball from Ishant but chops it on to his stumps. Aimed to drive it square off the wicket, but the ball didn't have the required pace or bounce. India need a few wickets more.

WICKET! Markram departs following a terrific innings. Change of angle does the trick as the batsman nicks one to Parthiv behind the stumps. Umpire calls it out and Markram reviews it, replays show bat hitting both ball and pad, and the opener has to make way to the pavillion. Markram's girlfriend and his parents are left in glum faces, as there is a slight applause from the crowd.

100 comes up for South Africa. The hosts have seem unaffected despite the dismissal of Elgar early in the lunch session. With the likes of du Plessis, de Villiers and de Cock down the order, India desperately need another one here.

We’ve got an Indian pitch in Centurion. But it’s a good first day Indian pitch...which means, don’t be surprised if SA piles a mountain of runs. #SAvIND

WICKET! Finally what India wanted, better sooner than never. With Murali Vijay placed at silly point, Ashwin bowls a short length delivery on noticing Dean Elgar a few inches out of his crease. The batsman lashes at it but the ball makes contact with Vijay's chest, who finally holds on to the boggling delivery. Virat Kohli is ecstatic and India need more.

WICKET | Elgar picks out silly point and departs for 31 off the bowling of Ashwin. SA 85/1 #SAvIND #FreedomSeries #ProteaFire pic.twitter.com/DL0RttM18n

Seriously good catch from Murali Vijay. Might just have made it two.

After Faf du Plessis won the toss in the 2nd Test against India and opted to bat once again, this time at Centurion, the South African openers put on a spirited show heading into the lunch break.

With India swapping Bhuvneshwar Kumar for Ishant Sharma, the opening pair of Dean Elgar and Aiden Markram did not take much time to get in the groove. With a cautious approach, the duo kept the scoreboard ticking and brought up their 5th wicket half-century partnership for the opening wicket in Tests. Markram bolstered the innings, striking a fine half-century.

India’s best opportunity came when Bumrah prompted Elgar to play a pull shot, that looked like landing to Murali Vijay at deep midwicket. But the Tamil Nadu batsman misjudged the catch, giving a boundary to Elgar instead.

India has experimented with all their possible options, but have proved ineffective. Can the visitors bounce back post lunch?

South African openers Aiden Markram and Dean Elgar have begun the innings steadily for the hosts. They have stuck to their natural game, punishing bad deliveries and not flirting much with the wide balls outside off. As Shaun Pollock mentioned earlier, India need a few wickets an hour or so. However, if they do not, du Plessis' men could cause all sort of headaches for India.

Faf du Plessis has won the toss yet again and has gone with the same decision to bat first, as in the first Test. Three changes in the Indian team. Parthiv Patel replaces Saha who is struggling with a minor niggle. KL Rahul makes way for Dhawan while Ishant Sharma replaces Bhuvneshwar, to get some extra bounce.

Staggered by the exclusion of Bhuvaneswar. Staggered.

@OfficialCSA many congrats to @NgidiLungi on making his test debut today. Fantastic young talent who has been slamming the door down for a couple of years now. Look forward to seeing him bowl!! #ProteaFire

Virat Kohli-led Team India will hope to bounce back from their 72-run defeat against South Africa, when the two teams face-off in the second Test, starting on Saturday.

Luck did not go India’s way in the first match, despite fighting efforts from the bowlers, including the pace quartret of Bhuvneshwar Kumar, Jasprit Bumrah,  Mohammed Shami and Hardik Pandya.

Pandya, too, would Have wanted to score a century in the first innings, and despite scoring 93, he failed to take his form forward in the second innings.

The main question ahead of the match will be the inclusion of Shikhar Dhawan, who could be replaced by Ajinkya Rahane for the Test match.

Dhawan has been out of form for a while now, and just managed to score a total of 32 runs from the two innings in the Cape Town Test.

Faf du Plessis’ side, meanwhile, have now found an in-form bower in Vernon Philander, who bagged nine wickets in the first Test, including a six-wicket haul.

In terms of batsmen, it will up to the duo of AB de Villiers and du Plessis to carry on the batting, if the Proteas’ top-order collapse early.

Meanwhile, Parthiv Patel and KL rahul could make it to India’s playing XI, as the Men in Blue hope to level the series.

What time does the match start?

The match is scheduled to start at 1.30 pm IST

Where can you watch the match?