Cheteshwar Pujara was glad India closed out the win against Bangladesh early because he could go home early on his wedding anniversary. 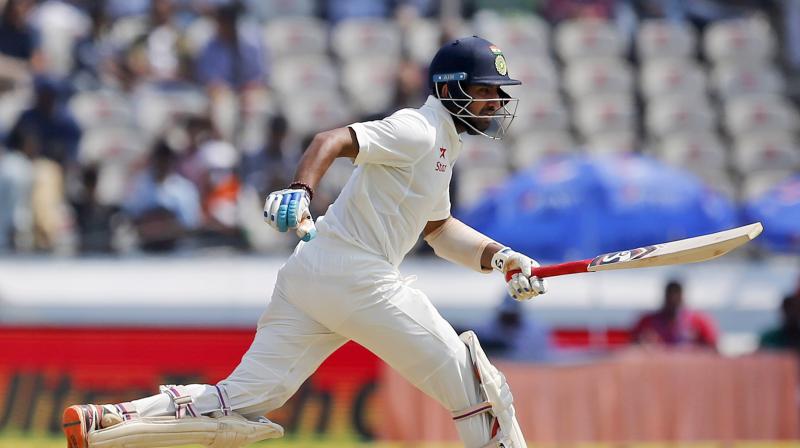 Cheteshwar Pujara scored 83 and 54 in the Test match against Bangladesh. (Photo: AP)

Hyderabad: India overpowered Bangladesh to win by 208 runs to win the one-off Test at the Rajiv Gandhi International Cricket Stadium here on Monday.

The hosts extended their unbeaten streak in Test matches to 19 and will maintain their No.1 ranking.

Set a huge score of 459 to win, Bangladesh were 202/5 at lunch but crumpled after the interval and conceded defeat. This gave batsman Cheteshwar Pujara an opportunity to head back early and meet his wife on their fourth wedding anniversary.

"It is my 4th wedding anniversary and I am really proud that the boys finished it early so that I can go back and meet my wife," said Pujara to bcci.tv.

Pujara, who scored 83 and an unbeaten 54 in this Test, has a great record playing in Hyderabad.

"I have enjoyed playing at this ground, got my first Test hundred here against New Zealand and then got a double hundred against Australia. Even in this game, I missed out on a hundred in the first innings but batted well in the second innings.”

Pujara has two double hundreds so far in Tests and he feels he needs to start converting his 70s and 80s into big scores.

"Once I got a double hundred there, I got my confidence and concentration back; my footwork started moving and from there on everything started coming along. Got some runs and then carried it in the New Zealand and England series. Very happy with the way things went," he concluded.