Kuldeep and Chahal will be back in focus as India look to seal series. 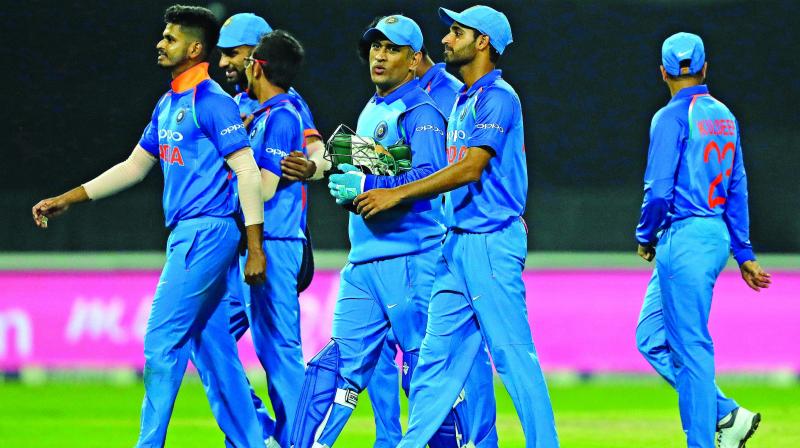 At Johannesburg, the dual rain intervention affected India’s momentum with both the bat and ball.

Port Elizabeth: Knocked back in the previous match, India will look to crush a South African revival before it becomes a threat to their pursuit of a maiden ODI series triumph here when the two sides clash in the fifth one-dayer, on Tuesday.

The Men in Blue still have a two-match cushion in the six-ODI series. They lead 3-1 after winning the first in Durban by six wickets, the second in Centurion by nine wickets and the third in Cape Town by 124 runs. The Proteas bounced back by winning the rain-affected and lightning-struck Pink ODI in Johannesburg by five wickets.

India’s wrist-spinners versus South Africa’s batting line-up is still the key contest going ahead in this series. At Johannesburg, the dual rain intervention affected India’s momentum with both the bat and ball.

More importantly, it reduced the target sufficiently that, despite AB de Villiers’ relative early dismissal, the home batsmen didn’t have much trouble getting past. The T20-mode of that second innings, coupled with the best batting surface of the series, allowed David Miller and Heinrich Klaasen to attack the wrist spinners and take the game away.

Of course, the dropped catch and bowling Miller off a no ball didn’t help India’s cause either. Yet, a rain-truncated innings is hardly enough evidence that South Africa have learnt how to contend with the wrist spin of Yuzvendra Chahal and Kuldeep Yadav.

Additionally, Bhuvneshwar Kumar and Jasprit Bumrah were not used to great effect as Virat Kohli chose to rely on the spinners, even when they were unable to respond to the Proteas’ concentrated attack. In this light, India’s team selection will come into focus in Port Elizabeth. There are still question-marks about the fitness of Kedar Jadhav, who suffered a hamstring injury in Cape Town and missed the previous game.

Albeit a part-timer, in his absence, India lose a reliable bowling alternative particularly if Hardik Pandya takes some stick and cannot complete his quota of overs.

Jadhav is adept at bowling slow spin, and mixing it up well with Chahal and Yadav. India do not have many fall-back options in Jadhav’s absence — Rohit Sharma last bowled an ODI over at Perth in January 2016.

Shreyas Iyer is known to practice leg break and had bowled an over against Sri Lanka in his debut series. Neither of them provides a reliable option like Jadhav does. Kohli himself is the other contender, but he bowls seam-up. In summation, Jadhav’s bowling is being missed more than his batting ability despite a troublesome middle-order and it indicates India’s team balance is still not optimal.

Ajinkya Rahane has scored 11 and 8 since making a comeback 79 at no. 4. Pandya’s forgettable tour with the bat (since the first Test in early January) continues, with scores of 14 and 9 in his last two outings. MS Dhoni’s 42 not out (off 43 balls) was the only saving grace for this shaky middle-order as India struggled to finish well at Johannesburg.

The series’ score-line has conveniently hidden the fact that India have a top-heavy batting order, despite the poor form of Rohit Sharma, who has scored 40 runs in the first four ODIs and boasts a gradually sinking ODI average of 11.45 in 12 matches on South African soil. Kohli (393 runs) and Shikhar Dhawan (271 runs) have scored nearly thrice the number of runs put together by the remaining batsmen (239) and it ought to be a cause of major worry for the Indian think-tank.