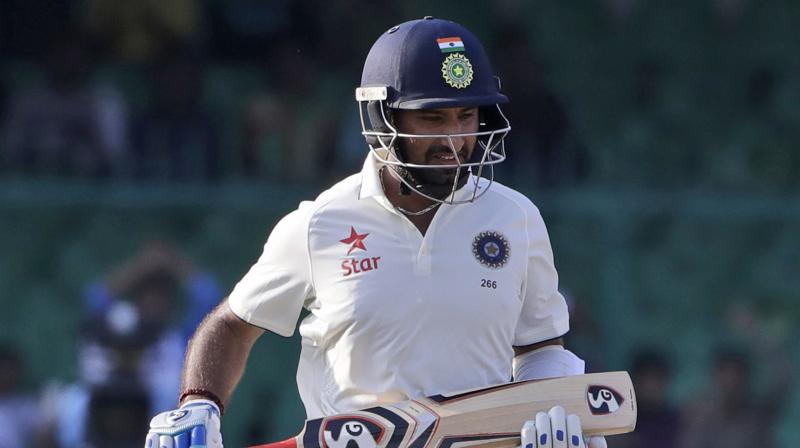 Hyderabad: A resurgent Saurashtra steamrollered Services by eight wickets to keep their quarter-final hopes alive in the Vijay Hazare Trophy here on Monday.

Buoyed by their big win over Jharkhand on Sunday, Saurashtra bundled out Services for 176 in 48.2 overs before knocking off the small chase in 21.4 overs. Samarth Vyas cracked an unbeaten 114 from 66 balls, an innings studded with 12 fours and eight sixes.

Skipper Cheteshwar Pujara gave fine support at the other end with a 39-ball 45 not out (3x4, 3x6) as the duo stitched an unbroken 143-run partnership after Saurashtra lost two wickets inside eight overs. The partnership came off just 86 balls to give a huge boost to their net run-rate (0.854) as Saurashtra (0.854) jumped past Hyderabad (-0.197) to third place despite both having 12 points each.

Saurashtra now take on leaders Vidarbha (16 points) in their crucial final group league match on February 14. Earlier left-arm spinner Dharmendrasinh Jadeja returned with figures of 4/26, while pace duo of Jaydev Unadkat and Shaurya Sanandia claimed two wickets each as Services failed to get going after winning the toss at the Gymkhana Ground in Secunderabad. Opener Soumik Chatterjee was the top-scorer with 52.

Chhattisgarh jumped to second place in the standings with a seven-wicket win over Jharkhand at the AOC Centre Thapar Stadium in Secunderabad. Saurabh Tiwary smashed a 105-ball 107 (8x4, 3x6) as Jharkhand scored 288/9 after being put in. But Tiwary's effort went in vain as Chhattisgarh came up with a solid batting show to chase down the target with four overs to spare.

Andhra, Mumbai enter QF
Andhra and Mumbai posted wins over Gujarat and Goa to qualify for the national knockout phase of the Vijay Hazare Trophy from Group C here.

While Andhra trounced Gujarat by nine wickets to notch up its fifth straight victory, Mumbai won its fourth game to make sure of advancing.