Skipper delivers yet again on the final day by delivering a lion-hearted performance, finished the seaon with 67 wickets 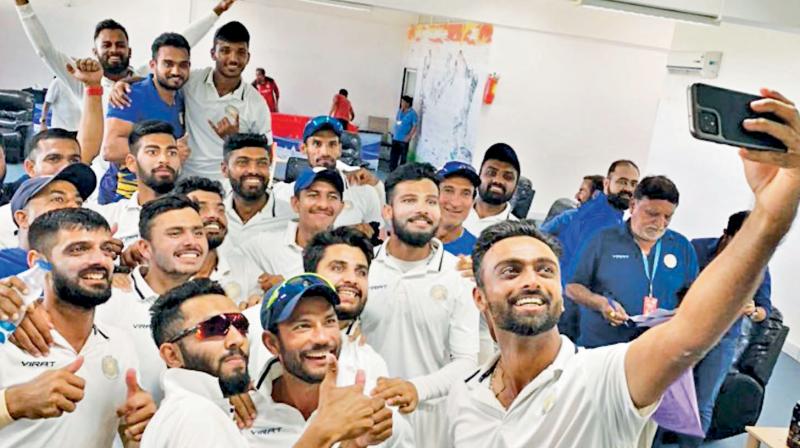 Rajkot: Skipper Jaydev Unadkat on Friday produced a lion-hearted spell when it mattered the most against Bengal, leading Saurashtra to their maiden Ranji Trophy triumph a year after stumbling at the last hurdle.

The win was achieved on the basis of the first-innings lead.

Bengal had the upper hand going into day five after Anustup Majumdar (63) and Arnab Nandi (40 not out) shared an unbeaten 91-run stand in the final session Thursday.

But Unadkat, who had single-handily taken Saurashtra into the final with a seven-wicket haul against Gujarat on the final day of their semifinal, rose to the occasion yet again to script a historic victory.

The left-arm pacer had the in-form Majumdar LBW and Akash Deep run out in a space of three balls to turn the game on its head. Unadkat ended as the season's leading wicket-taker with 67 scalps at a staggering average of 13.23, one short of an all-time record.

One hour and 10 minutes of play in the decisive morning session yielded 27 runs and four wickets with Bengal all out for 381, giving Saurashtra a 44-run first innings lead. At the start of the day, Bengal needed 72 runs for the first-innings lead with four wickets in hands.

In the second innings, all Saurashtra had to do was to bat out the remaining time before both captains decided to call off the game and shake hands. They eventually did that at tea time after Saurashtra sauntered 105 for three in 34 overs.

With the win, Saurashtra ended their Ranji Trophy title drought while a fighting Bengal will have to wait longer for their first crown since the 1989-90 season.