A last-ball six fetched a historic 100 thIPL win for MS Dhoni as captain. 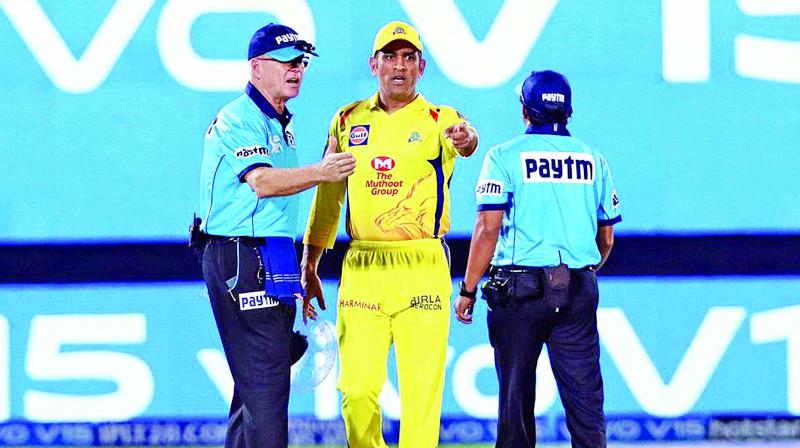 Fining a multimillionaire cricketer 50 per cent of his fee was akin to a light rap on the knuckles.

This was no Captain Cool. In an uncharacteristic flare-up, CSK skipper MS Dhoni walked on to the field of play to protest against a disputed umpiring decision over a waist high full toss in the climactic moments of a tense match against Rajasthan Royals in Jaipur.

If any other captain or player had been as demonstrative as Dhoni in stepping on to the ground during play and picking up an argument with the umpires would have faced a minimum sanction of a suspension for two matches. Fining a multimillionaire cricketer 50 per cent of his fee was akin to a light rap on the knuckles.

“MS Dhoni, the Chennai Super Kings captain, was fined 50 percent of his match fees for breaching the Indian Premier League’s Code of Conduct during his team’s match against Rajasthan Royals at Jaipur,” the league said in its statement.

It might have been another bad night out for the umpires although the umpire at the bowler’s end seemed to spot the full toss and no-balled it for height but the senior umpire at square leg overruled it. No free hit was given and an incensed Dhoni did the unthinkable in striding out to the middle.

No captain has the right to invade the field and publicly remonstrate with the officials. This was a blot on Dhoni’s copybook as a model captain who has been known to never lose his composure even in the most awkward of situations. Former player and commentator Sanjay Manjrekar said so too in condemning this Dhoni act.

Confusion had reigned in the last over after umpire Ulhas Gandhe signalled Ben Stokes’ waist-high delivery a no ball but the decision was overruled by square-leg umpire Bruce Oxenford, prompting Dhoni to enter the field and confront the umpires. The no ball was eventually deemed a legal delivery but Chennai, needing four runs off the last ball, managed to win with a six from Mitchell Santner.

“MS was after some clarity and it didn’t seem to be coming so he took the opportunity to go out and discuss it with the umpires. The rights and wrongs will be discussed by everybody,” Chennai head coach Stephen Fleming said in Dhoni’s defence. “He was certainly fired up about the way the decision was handled and why it was overturned... and he wanted to get it clarified at a key moment.”

Jos Buttler of Rajasthan Royals admitted that tensions were running high as CSK were chasing 18 in the final over. “But whether stepping on to the pitch is right, no, probably not,” he said. Former England captain Michael Vaughan was more fierce in his criticism. “This is not a good look for the game,” Vaughan tweeted. “No place at all for a captain to storm onto the pitch from the dugout.”

Cricket administrator and former Third Umpire M.R. Singh states that Dhoni should not have come on to the field. He further states that calling ‘a no-ball’ is at the discretion of the main umpire.

“No player is allowed to invade the ground when the match is in progress, and I am surprised Dhoni did it. But if I were the umpire I would have definitely asked him not to enter into the field,” believes M.R. Singh who adds that Square Leg Umpire can only be consulted if required.

Former Indian cricketer and commentator Aakash Chopra couldn’t have agreed more. He says, “The the opposition captain has no right to walk out on the pitch after being dismissed, and that Dhoni had set a wrong precedent.”

Interestingly, Aakash also cites the low umpiring standards in this IPL as one of the reasons for Dhoni to be miffed. “It was a no-ball given and then was reversed.  But it is within the laws of the game for an umpire to revoke his decision if he feels he’s made a mistake,” Aakash adds.

Expressing his concern and finding fault with Dhon’s behaviour, former left-arm orthodox bowler Bishan Bedi describes it as, “not within the spirit of the game.”

Sportswriter and commentator Ayaz Memon too finds it surprising to see Dhoni storming on to the field in the last over to demand a no-ball. Sharing that the wicketkeeper batsman will be upset with his own behaviour when he sees the visuals, he describes that Dhoni’s behaviour was totally out of character.

“It’s a tense match, but no excuse for the ugly flare-up. He is lucky to have got away with a fine,” Ayaz explains.

While Dhoni uncharacteristically lost his cool, former Indian cricketer Suru Nayak believes that his issue is being zoomed in too much. “Dhoni has already been fined and he too accepted the sanction, that’s the end of the matter. Why are you zooming in on his character, it’s a stray incident and I hope people will put an end to it soon,” clarifies Nayak.

The result was hailed by a small contingent of CSK fans in Jaipur and millions more on TV as Santner struck Sokes for a six when at least four were needed to win. After all, this was a historic win for Dhoni personally. This was his 100thIPL win as captain of CSK as well as Rising Superstars, Pune. This is an unprecedented achievement for an extraordinary captain and leader of men. The win took the table leaders to 12 points from seven games and within a couple of wins of qualifying for the play-offs.

The occasion was, however, blotted by Dhoni’s behaviour more in keeping with contact sports like hockey and football in which mid pitch arguments with umpires are more commonplace.