ICC CWC'19: India vs New Zealand; determining the loopholes and core of the team

So far the Indian unit has had no big problems, their batting looks strong, with Rohit Sharma getting back into form after his unbeaten 122. 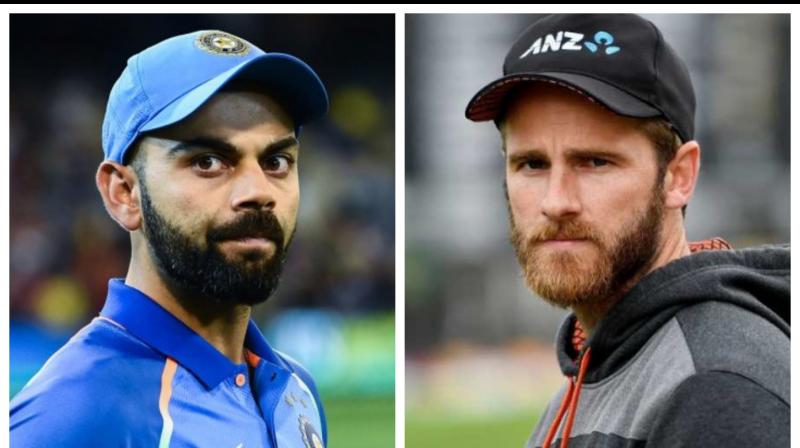 Barring the injury that Dhawan suffered during the match against Australia, the top order looks fine. (Photo:AFP)

Mumbai: As the Indian team gears up for its third World Cup match against the table toppers New Zealand, we dig deeper into the squads to determine the loopholes of both the teams.

So far the Indian unit has had no big problems, their batting looks strong, with Rohit Sharma getting back into form after his unbeaten 122 versus the struggling Proteas, the top order looks all sorted. Barring the injury that Dhawan suffered during the match against Australia, the top order looks fine.

However, the team management will push KL Rahul up the order to open the innings with Rohit. KL already has notched up his maiden hundred during the warm up match against Bangladesh.

If we talk about the middle order, then, the middle order also has been in good touch with captain Kohli getting 82 against the Australians, and Mahendra Singh Dhoni also showed his prime form when he slammed a hundred along with KL Rahul to guide India to their victory during their warm up match versus the Bangladeshis.

Now, the real question remains is who will bat at number four – will it be Vijay Shankar or World Cup ousted player, Rishabh Pant?.

The spin twin pair of Kuldeep Yadav and Yuzvendra Chahal is not working at all. Only Chahal has been able to scalp wickets during crucial times, while Kuldeep has been conceding runs unnecessarily.

However, it remains to be seen if India plays Kuldeep in the next match or do they take Chinaman Ravindra Jadeja as he has the knack of picking wickets during crucial times.

India also has an extra spinner in Kedar Jadhav, who has been out of form in terms of batting due to lack of match practice. While, in terms of bowling, Kedar was smashed all over the park in his one-over spell.

So far, New Zealand’s climb to the top of the table has been little scrappy. After demolishing the Sri Lanka in the first World Cup warm up match, the Black Caps suffered a huge batting collapse.

The team somehow managed to pull off a win against minnows Bangladesh, who defeated the struggling Proteas team. The Kiwis rode on Ross Taylor’s 82 and Kane Williamson’s 40 to cliam their second win.

2015 World Cup’s top scorer Martin Guptill is in poor form. The opener got many small starts, but he failed to convert it to a big score. During the match versus the ‘tigers’ the batting unit except Taylor and Williamson, totally faltered in front of the Bangladeshi bowlers.

However, during the first match against Sri Lanka, Kiwi openers Colin Munro and Martin Guptill did find form after they lead the team victory with scores of 58 and 73 respectively.

During the World Cup warm-up match versus the West Indies, we had seen that the Kiwi batsmen failed to counter the fast bouncers as they lost the match by 91 runs. Only Tom Blundell’s 106 and Williamson’s 85 helped the Kiwis to put up some fight.

However, their bowling unit rely too much on speed-star Trent Boult to scalp wickets quickly. Other than Boult, all other bowlers have failed to bundle out the teams quickly.

In the match against the West Indies, the bowlers went for plentiful of runs.  However, during the Bangladesh match, the bowlers showed their ability as they restricted Bangladesh to a below par score of 244.