Sports   Cricket  13 Jul 2019  Waugh wah! Trust Dhoni with what he does
Sports, Cricket

Waugh wah! Trust Dhoni with what he does

Waugh said it still amazes him how Dhoni has got India across the line so many times in the past. 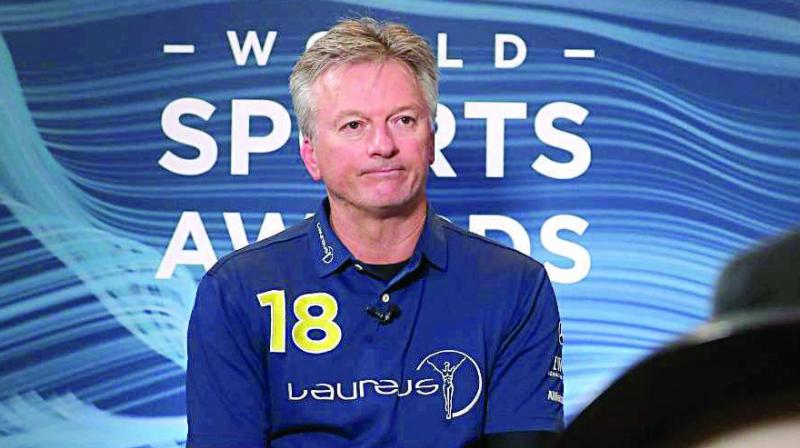 LONDON: Former Australian cricketer Steve Waugh, one of the shrewdest leaders, has thrown his weight behind the under-fire M.S. Dhoni saying that the 38-year-old Indian who is on the verge of his retirement is a genius in ODIs.

“The other day (semifinal against New Zealand), until his run out, India had a chance to win the game. You have to remember if he wasn’t such a good player you wouldn’t be doubting what is he doing,” Waugh told a select group of reporters at the inaugural Criiio Cup, a celebration of street cricket, at Trafalgar Square.

Waugh said it still amazes him how Dhoni has got India across the line so many times in the past. “He’s getting criticism because he is still there. I’m sure, he’s left his run-up a bit slow, but I will still trust him with what he is doing,” he added. Excerpts:

Are you surprised with the way the Aussies lost in the semifinal to England?

It’s called cricket, mate! England were too good. Someone has got to put up their hand and say: ‘Oppositions are too good.’ The margin of victory was a surprise. But, that’s cricket. You never know what’s going to happen.

Cricket is going to see a new world champion in a few days time. How good is that for the game at the international level?
I think it’ll be really important if someone like New Zealand, which is a great rugby country, go on to win. They have probably the greatest sporting team in the world in the All Blacks. Cricket is always trying to get a foothold. So, to make the final and potentially win, it will be game-changing for New Zealand. England, of course, have been to three World Cup finals. The country is very passionate about cricket. Look, if either side wins, it’s going to be great for their country. I know what it’s like to win a World Cup. It’s exciting, and the people get behind it. They feel they’re a part of it. So it’s a great celebration.

What makes the current England team different?
They play without fear. That is very hard to do in professional sport. There’s no weaknesses in the side. They are one of the best ODI sides I have seen. We will, obviously, judge them by their performance on Sunday. If they win, they will be one of the greatest, if they lose, then they will be one of teams who tried but didn’t make it.

Moment of the World Cup...
I haven’t seen much because of the time difference in Australia. It’s hard to pick one though. Ben Stokes’ catch was pretty incredible. It set the tone for the World Cup. And Sheldon Cotrell’s catch and Martin Guptill’s run-out. These are some of the brilliant moments on the field. However, the best moment of the tournament should come on Sunday, in the final at Lord’s.

The World Cup had just 10 countries, ignoring the minnows. Is the ICC trying to spread the game?
I think, Afghanistan have been a success story in the last couple of years. Aren’t they? They’re (ICC) telling the other countries to do that. They’ve been outstanding. There’s got to be other countries out there who can make their next step. We need to globalise cricket. Cricket needs to be a global sport to succeed.

Hopefully, we can see some new countries develop. Maybe, they can start by playing street cricket! You want experienced people in those small nations giving expertise.

On suggestions to introduce IPL-like playoffs in the World Cup...
Maybe, the suggestion comes from India after their defeat in the semifinal! Everyone knows the rules before we play. The current format is good. The World Cup is all about performing under pressure. I think one more game would drag the schedule.

On the world championship of Test cricket...
It’s well overdue. It should have been there 10 years ago. But somehow we just couldn’t manage it. You definitely need World Championship in Test cricket. For me, Test cricket is the most important format.  The players need financial security to take care of themselves, family and business later on, but as long as they don’t take anything away from Test cricket.