The English series has thrown up a lot of rough areas to be fixed for Team India. 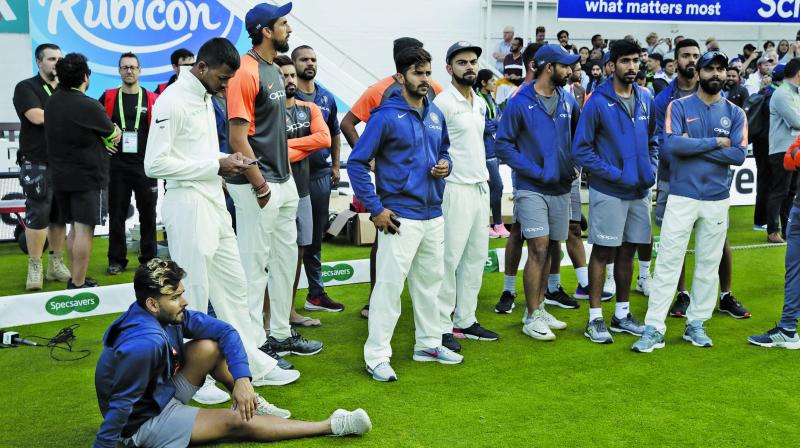 Hyderabad: “The scoreline reads 3-1, which means India have lost the series. What it doesn’t say is that India could have been 3-1 or 2-2.” That was Ravi Shastri, India’s head coach in his typical commentary style, ahead of the final game of the five-match Test series against England.

These words might soothe ears for a moment but in reality, there is nothing called ‘could have been’ in cricket. Either you win or lose. However, Test cricket provides an additional option of a draw. But, the harsh reality is that the world No. 1 Test side have finished the series 1-4.

Captain Kohli and Shastri’s talks and efforts to make this team the ‘best touring side’ of all time is no doubt a fine initiative for the future of Indian cricket but if the latter feels content with beating teams like Sri Lanka and West Indies (given their current forms), then there is definitely something wrong with the approach.

Shastri backed it though, when he said: “If you see in the last three years, we’ve won nine matches overseas and three series (twice in Lanka, once in West Indies). I can’t see any other team in the last 15-20 years who had that kind of run in such a short time. You’ve had some great players playing in those series.”

Irrespective of Shastri’s comments, the current scenario portrays a different picture. The English series too has thrown up a lot of rough areas to be fixed.

Shortening the practice match
India’s only practice match that was scheduled against Essex ahead of the series was reduced from four-day to a three-day affair. Even in their last South Africa tour India scrapped their warm-up match because the team management thought it would be a better idea of practicing in nets. However, India went on to lose their first two Tests.

In England, reasons for slicing a day off the match are varied:
1. Initial reports said that ‘heat waves’ were the actual reason and team wanted to rest so that they get an additional day for Edgbaston (first) Test.
2. There were also speculations about Indian team’s displeasure over the outfield, which lacked grass, and also the pitch condition.
3. Coach Ravi Shastri had his own story. He said that the grass cover was good on the pitch and the reason to reduce a day was ‘logistics’ and ‘weather.’
Well, it is still a suspense which side of the story is to be believed.

Captain Kohli — work in progress
There is no doubt that Virat is one of the greatest batsmen of his generation but his incredible batting cannot cover up his captaincy flaws. Virat’s over-aggression and wrong judgement at times has costed the side many a time. Not ready to learn from his mistakes has also been one of his biggest flaws. The abysmal show of Royal Challengers Bangalore in IPL is no surprise.

Bishan Singh Bedi too criticised him for his decision to bat second in the Champions Trophy final which the Men in Blue lost to Pakistan. Coming to the England series, poor team selection, allowing the tail-enders to settle (Sam Curran’s case) by withdrawing wicket-taking bowlers from the attack and too much of cutting and chopping in the team have been a few of Virat’s captaincy blunders. However, the skipper has ‘no regrets’ over the way they have played as stated by him in the post-match presentation after the final Test.

Skipper hits out at scribe
On Tuesday, Kohli was once again at full swing in the press conference and hit out at one of the scribes (Indian) on being asked whether he believed this was the best India side in 15 years.

The reporter asked that “the tags of best Indian side in last 15 years, do these things put additional pressure on you or do you believe you really are?” to which Virat replied, “We have to believe we are the best side, why not?” When counter questioned by Virat whether the reporter believed they were, the journalist replied with ‘not sure,’ prompting Kohli to end it with a curt “that’s your opinion, thank you.”

Selection blunder
‘Well Begun is half done.’ However, the visitors made a sorry start to the Test series, losing by 31 runs owing to a batting failure.

The most shocking part was omission of the experienced Cheteshwar Pujara from the playing XI. Later, what unfolded was a complete batting failure from the Indian side in both the innings. Poor shot selection and their eagerness to reach for the ball on the sixth and seventh stumps made them pay the price. Skipper Virat was the lone warrior with his scores of 149 and 51, in vain.

In the second Test, Umesh Yadav was dropped to accommodate another Yadav-Kuldeep. However, tricky weather and unfavourable conditions added to India’s misery as Kuldeep conceded 44 runs from nine overs as India lost by an innings and 159 runs. Kohli later admitted that he got the selection completely wrong, but India were two down in the series by then.

Jittery openers
India’s opening woes in English conditions continued to haunt them as none of the three batters - Murali Vijay, Shikhar Dhawan and K. L. Rahul could leave an impression. Rahul, though played an exceptional knock of 149 in the last innings of the final Test to save India’s blushes and improve his figures, but it was too late.

However, Rahul’s last knock helped him accelerate and top the Indian openers’ chart with a total of 299 runs at an average of 29.90.

Unreliable ’keepers
With the departure of Mahendra Singh Dhoni from the longer format, no other wicketkeeper has managed to prove his case with both bat and gloves. Its reflections were clearly seen in this series as Dinesh Karthik and Rishabh Pant were disappointing behind the stumps.  In front, the latter did sparkle with a belligerent 114 in the final Test for comfort.

Karthik was equally rusty behind the wickets and failed to judge many swinging deliveries. So was the case with Rishabh who conceded 76 runs in byes in six innings.

With the upcoming Asia Cup and later a home series against West Indies the dust might settle soon, but it’s high time the CoA put in a word with Kohli-Shastri and their associates about their forgettable English summer.