India are still on 326 runs ahead of the Proteas and will start their second innings today. 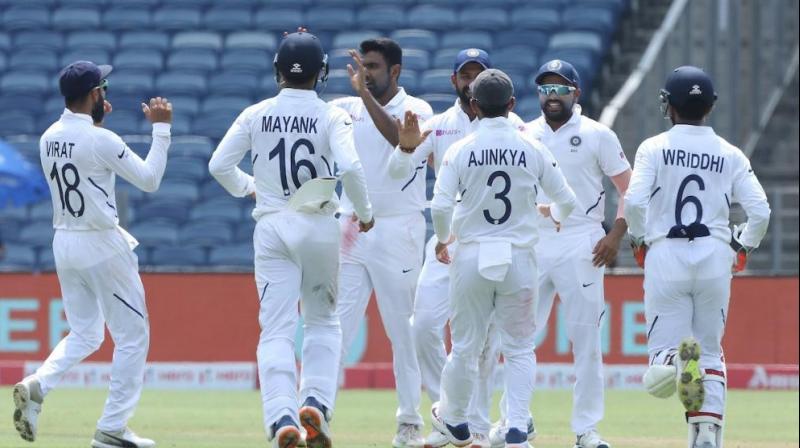 South Africa managed to score 275 runs in their first innings on day three of the second Test match before India bundled out the visitors. (Photo: Twitter/BCCI)

Pune: South Africa managed to score 275 runs in their first innings on day three of the second Test match before India bundled out the visitors at the Maharashtra Cricket Association (MCA) Stadium here on Saturday.

India are still on 326 runs ahead of the Proteas and will start their second innings today.

South Africa resumed their first innings from 36/3 on day three with Anrich Nortje and Theunis de Bruyn on the field. However, India did not take much time to get their first breakthrough of the day as Mohammad Shami got hold of Nortje (3) in the third over of the day.

Skipper Faf du Plessis then came out to bat could not form a partnership with Bruyn as the latter was caught behind off Umesh Yadav's delivery. Bruyn's dismissal brought Quinton de Kock out on the field.

Both Du Plessis and De Kock played cautiously, avoiding any risky shot. The duo provided the Proteas with some momentum as they added 75 runs on the board.

Du Plessis completed his half-century but soon after that, the partnership was broken as De Kock (31) was bowled by Ashwin. Senuran Muthusamy then took the field but failed to leave a mark as he only managed to score seven runs before Ravindra Jadeja took his wicket.

Du Plessis was then joined by Vernon Philander and both added 23 runs on the scoreboard. Ravichandran Ashwin then handed India with the most crucial wicket as he dismissed Du Plessis (64). Keshav Maharaj was the next batsman.

Philander and Maharaj played steadily and shrugged off some pressure. Both kept the scoreboard ticking and restricted Indian bowlers from taking any wicket.

They formed a 109-run partnership and Maharaj completed his half-century.

Finally, in the 102nd over, Ashwin broke the partnership as he got hold of Maharaj (72). Kagiso Rabada was the next batsman but Ashwin dismissed him as well to end South Africa's first innings.