Of the 8 members in fray, Mohammad Azharuddin was the only one ‘rejected’. 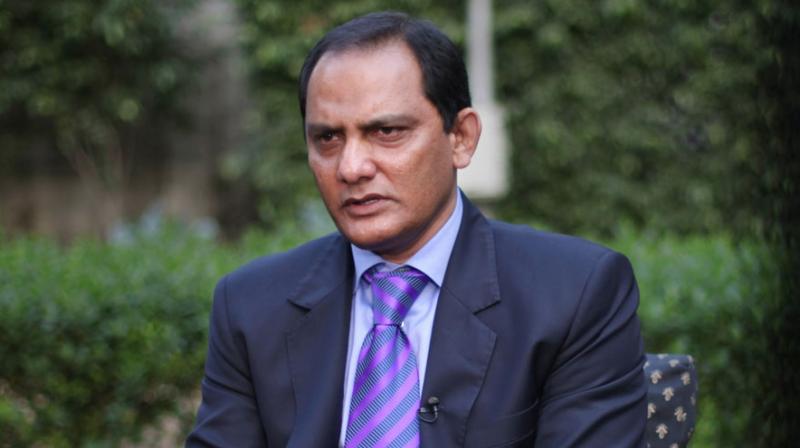 Mohammad Azharuddin had filed his nomination on behalf of the National Cricket Club, which had already given the voter authorisation letter to another person ahead of the cut off date for submission of representatives. (Photo: AP)

Of the eight members in fray, Azhar was the only one ‘rejected’ while three were disqualified for cooling off period (for holding posts on the previous body), three barred on the 9 cumulative years in office rule while two were cleared, according to the list put up at the HCA offices.

An annoyed Azhar sought answers that were not forthcoming. “The Returning Officer is not giving me an explanation as to why my candidature has been rejected,” he fumed.

The 53-year-old smells a conspiracy. “They are biased. It’s very sad that people have conspired against me,” he said.

Azhar had filed his nomination on behalf of the National Cricket Club, which had already given the voter authorisation letter to another person ahead of the cut off date for submission of representatives. Later, he wanted to contest by virtue of being a former international (who, going by Justice Lodha Committee recommendations, automatically become members in their state associations). “I don’t understand why they would not want to have a cricketer in the committee. I have done the hard work and represented the country at the highest level of the game. Who else can understand the needs of a cricketer better? I had so many people calling me and sending their best wishes when I filed my nomination. They all would be disappointed too on the turn of events,” he said. 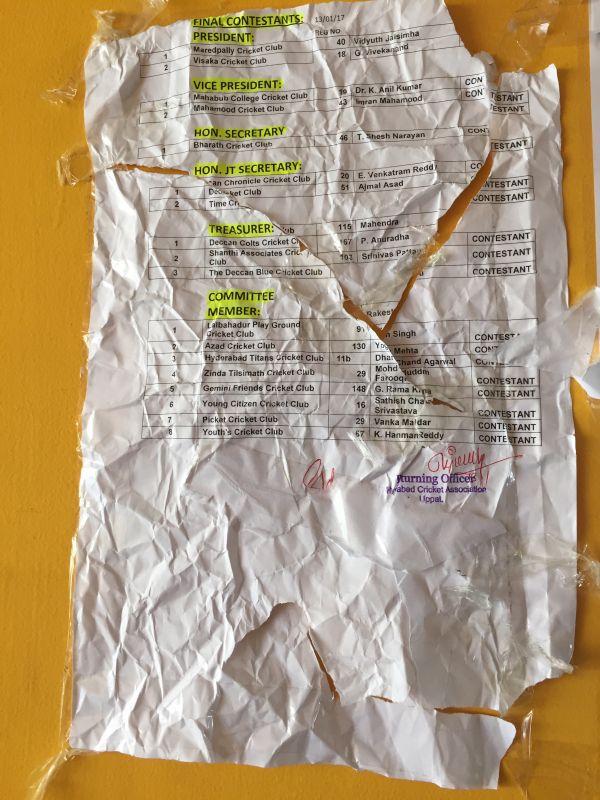 The final list of candidates for elections to the Hyderabad Cricket Association stands disfigured on a wall at the Rajiv Gandhi International Cricket Stadium after disgruntled members pounded it on Saturday. (Photo: DC/ Moses Kondety)

Other members too are peeved by the final list of candidates, which marks T. Sheshnarayan as the sole contestant for Secretary’s post. They vented ire by pounding the paper pasted on the wall at the Rajiv Gandhi International Cricket Stadium. Members also point out that the Councillor’s post has been listed as ‘Committee Member’ in the final list displayed.

The elections were necessitated after Sheshnarayan petitioned the Ranga Reddy District court, which appointed Advocate Commissioner K. Rajeev Reddy as Returning Officer. However, the HCA filed a revision petition in the High Court pointing procedural flaws. The HC, while giving polls the go-ahead, has asked the results to be withheld till it disposes of the petition, which will come up for hearing when the Court opens after Sankranti vacation on Wednesday, a day after the elections.

Former president Arshad Ayub, a voter by virtue of being an international cricketer, alleged procedural flaws. “The procedure followed conforms neither to the Lodha recommendations nor the HCA constitution. He (the RO) has jumbled up everything. The Returning Officer has to answer queries of members, who are surprised by his behaviour,” he said.

Arshad also contended the approved candidature of presidential nominee G. Vivekanand, “who is an Advisor to the Government of Telangana, from whom he draws a salary, and holds the rank of a cabinet minister. Lodha recommendations are clear that government servants and ministers are not eligible to contest.”

“I feel that this election is completely fixed. It’s a fraud played on the members and will not stand legal scrutiny,” Arshad added.