Aussies ready to give Virat Kohli and Company run for their money. 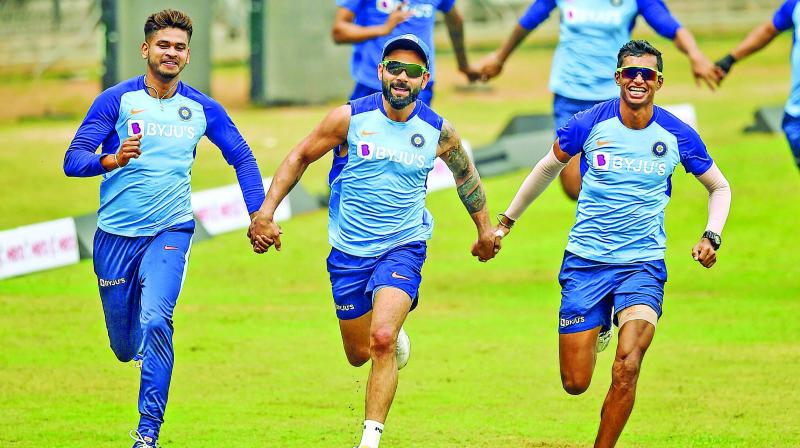 Shreyas Iyer, Virat Kohli and Navdeep Saini hold hands and jog during a training session ahead of the first ODI of a three-match series against Australia in Mumbai on Monday. (Photo: AFP)

Mumbai: With skipper Virat Kohli stepping in to resolve India’s opening puzzle, the formidable hosts will look to ensure that their enviable home run remains intact against a full-strength Australia when the two teams clash in an ODI series starting here Tuesday.

Kohli said he has no hesitation coming down the order to ensure that KL Rahul’s consistency and Shikhar Dhawan’s experience are both accommodated in the Indian playing XI. “...big possibility. I would be very happy to do so. Look I am not possessive about where I play. I am not insecure about where I bat,” Kohli said.

At a time when bilateral ODI series are fast losing relevance, the three-match rubber between two top teams could give a fresh lease of life to the format. The high-voltage rivalries that fans enjoy will be back as Rohit Sharma’s elegance will be pitted against enforcer David Warner while the Virat Kohli vs Steve Smith duel will resume in earnest.

India’s hungry-for-wickets pace attack led by Jasprit Bumrah, Mohammed Shami and Navdeep Saini is ready to test the Australians with subtle variations. On the other hand, IPL’s costliest foreign recruit Pat Cummins, the crafty Kane Richardson and the ever-dependable Mitchell Starc will leave no stone unturned to make life uncomfortable for Kohli and his men.

Alex Carey’s gutsy batting and faultless glove-work will face the challenge of Rishabh Pant’s flair. The young Marnus Labuschagne, easily the most exciting talent spreading his wings on the international cricket map with some stellar performances in the Test arena, would like to replicate his form in the shorter formats.

On current form, Rahul was miles ahead to partner Rohit Sharma at the top of the order but Dhawan has had a phenomenal record in white ball cricket against the Aussies. In fact, in their last meeting in the ODI World Cup, it was Dhawan’s superb hundred that paved the way for an easy victory for the Indians. But that was a good seven months back and Dhawan, since then, endured a spate of injuries. He also lost form only to regain a bit of it by scoring a half-century in the final T20 against Sri Lanka.